The Reluctant Bride by Chula Stone 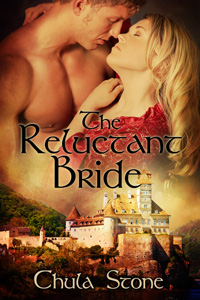 Even as others feast around her, Lady Liliana is in no mood to celebrate the peace made between her father and his greatest rival, for this accord was sealed with a contract for her hand in marriage—her opinion on the matter notwithstanding. Almost before she knows it, Liliana finds herself the reluctant bride of Lord Andrew, the son of her family’s oldest and bitterest foe.

To Liliana’s surprise, though he is fierce in battle, Andrew is no bloodthirsty savage, and in fact his schooling and cleverness are a match for her own. Educated as he may be, however, Liliana soon learns the hard way that Andrew is more than willing to bare her bottom and chastise her firmly if she forgets her duty to honor and obey him.

After a brutal and cowardly attack on both of their families, Liliana and Andrew have no choice but to act together if they are to survive and save their people from a ruinous war. Can a strong and lasting love emerge from the chaos, or will their marriage and their realm be torn apart by conflict?

Publisher’s Note: The Reluctant Bride includes spankings and sexual scenes. If such material offends you, please don’t buy this book.

Andrew’s blood ran hot. “This peace is vital to both our homelands. This marriage is vital to the peace. That means that it is our duty to do whatever we must in order to get along and live amicably with each other. In time, we’ll learn to like each other and I hope eventually, find love somewhere along the way. I intend to do my best to win you even.” He fingered the small box in his pocket but before he could get it out, Liliana sneered at him so coldly, his hand froze in place.

“Oh, you think so, do you? I can tell you now plainly, I will never like a Wilborn, let alone love one! You can force me to marry you. You’ve already proved that. But you can’t make me act the part of your wife and you can’t make me stay in this room with you.” She picked up the poker and brandished it at him while she sidled back toward the door. “I’m going. Now, goodbye!”

He caught her easily, taking the poker in one hand and her waist under his other arm to lift her off the floor. “You will stay here in my bedroom! You will act the part of my wife and you will show me respect at all times. That doesn’t include yelling at me like a fishwife and attacking me with fire irons.” He couldn’t fight down the insane impulse to laugh at her ridiculous attempts to escape him.

“Let go of me! Let go!” She began to fight him in earnest, twisting in his arms until she was facing him with her arm between them in an awkward angle.

Worried that he might harm her, he loosened his grip. “Stop that! You’re only going to hurt yourself. Be still! I mean it! Be still!” He turned her back to the wall, then used it to trap her there with his outstretched arms. Hoping to get her attention by towering over her, he stood as straight as he could. Catching her eye and holding it steadily, he intoned, “I will be obeyed.”

She lunged under his arms and made a sudden dash for the door. Having no idea what else to do, he caught up with her and popped her on the backside with one hand while slamming the door closed with the other. With her skirts protecting her, he knew he would have to work to get her attention, so he gave her three more hard swats.

She screeched in his ear. “Ow! What are you doing?”

He pulled back, so that her mouth was farther from his ear before he growled, “If you don’t know that, then it’s high time you learned. This, young lady, is called a spanking and it’s what happens to wives who pitch ridiculous, dramatic fits!” He pulled her over to the stool he sat on to pull his boots on and off. Seating himself hastily, he pushed her down over his knees, thankful that she was wearing only dainty dancing slippers. With the way she was kicking and struggling, any sort of shoe on her foot would have been dangerous for both of them.