The Rules of the Ranch by Emma Greenfield 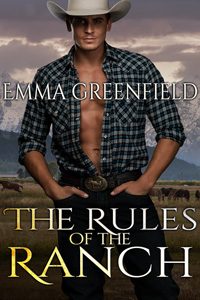 Celeste Dunn has been spending her life getting high and sleeping on a friend’s couch, but her world is turned upside down when rancher Jacob Cannon tracks her down. Before he passed away, her estranged father made Jacob promise to look out for Celeste, and after the funeral she quickly discovers that the stern, handsome cowboy will not put up with her delinquent behavior.

When she tries to leave the small, isolated community where her father had made his home, Jacob makes it clear that she will not be going anywhere. Her sharp tongue and defiant attitude quickly earn her a sound spanking on her bare bottom and she soon learns the hard way that on this old-fashioned ranch naughty girls who swear get their mouths washed out with soap.

Over the coming weeks, Jacob gives Celeste the strict correction, loving guidance, and tender care she has long needed. To her surprise, Celeste finds herself falling in love with Jacob, and when he takes her in his arms and claims her properly she is left feeling safe and satisfied in a way she never has before. But can a wild child like her ever learn to obey the rules of the ranch?

Publisher’s Note: The Rules of the Ranch includes sexual scenes and spankings. If such material offends you, please don’t buy this book.

I did, feeling skeptical that it was ever going to happen. He ran his finger over my lips.

“I’ll take care of you,” he said. He was earnest but I didn’t know what he wanted from me.

“Okay,” I said because it seemed like I needed to say something.

I gasped a little when he pressed into me.

“Shh,” he said, then kissed my temple.

I tried to relax. I opened my thighs wider. He pulled out, then pressed in slowly. My stomach did a twirl. He went deeper, and when he withdrew, he pulled my soul out with it. I gasped, amazed at how good that felt. He rocked slowly, thrusting in at an even pace. His weight rested on me. This was so unlike any sex I’d ever had before. I’d had boring sex, wild sex, and angry sex. This, while slow, wasn’t dull. He found a spot inside me that lifted me each time he hit it. When I struggled to make him go faster, clutching his butt to egg him on, he took my hands away and held my wrists down next to my head.

I arched my back as the need built in me. I writhed, but I was pinned, at the mercy of his steady fucking. Then he did something with his hips, adding a thrust with a bit of a twist. My eyelashes fluttered. He nibbled on my chin, then my earlobe. Goosebumps rose over my skin, a complementary feeling to what he was building inside me. I whimpered. I needed this feeling to go somewhere. It was so different from a clit orgasm. When he kissed me, I bit down on his bottom lip to hold him hostage. He had to go faster, or else I might die.

“Please,” I whined. I tugged uselessly against his hands. He kept going steady, so I added some pressure to his lip.

He chuckled and thrust hard.

I moaned and opened my mouth without thinking, freeing him. He did it again. I rubbed my breasts against his chest and tried to control his speed with my legs. I needed something, something that I couldn’t put a name to. I needed him to give it to me.

He groaned and put his face on the pillow, well above the height of my head. I pressed my lips to his neck. He began to pump harder. One of his hands let go of my wrist and worked its way under my nightgown, running up my waist until he found my breast. He rolled my breast and worked my hard nipple, sending violent shivers from my breast to my pussy. With my hand free, I got it between our bodies and touched my clit.

When I clenched, Jacob growled. He played with my breast as he worked in and out of me. He was so strong and I could feel the power in each of his thrusts. As I ran my legs over his, I felt his muscled legs and dimpled ass.

My fingers danced and I was working up a sweat to reach the peak. I let out a long cry as the pleasure rippled through me like a warm bath on a sunny day while drinking a cool glass of wine. I kept touching myself to draw it out.

Jacob lost the control he’d maintained and dove into me again and again, grunting and holding my hip. I listened vaguely as he came, a moaning gasp above my head. I still had some pleasure left in me and when my pussy clenched around him, I felt his breath catch.

2018-04-20
Chris
Previous: Theirs to Use Grabs a Top 100 Spot
Next: Conquered: A Dark Sci-Fi Reverse Harem Romance by Sara Fields