The Sergeant’s Claim by Emily Tilton 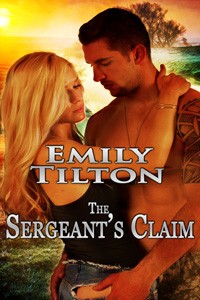 Upon reaching the age of eighteen, Jane was taken from her school and sent to a specialized facility where young women are prepared for marriage. She knows that her future husband will demand her complete submission, but she cannot help blushing crimson at the thought of belonging so completely to a man she has not yet met, let alone being shared by three men each seeking to prove himself the most adept at mastering her.

Under ordinary circumstances Sergeant Andrew Creston would not have the resources needed to marry, but his skill and courage in battle have won him the chance to compete for a bride. Over the course of several days, Andrew and two higher ranking officers will have the opportunity to demonstrate their ability to properly master a woman, and the man deemed to have dominated her most thoroughly will win the right to claim her as his wife.

Jane’s defiance when ordered to pleasure Andrew on the first night of the competition earns her a painful, embarrassing spanking from the handsome soldier, yet her body’s response to his dominance is unmistakable and she is left quivering with desire. But with two other men also going all out to prove themselves best suited to claim her, it will take much more than just a bare-bottom spanking for Andrew to make her his forever.

“Hands on your head, dear,” the headmistress said as soon as Jane had emerged, naked and blushing, and closed the door to the schoolroom behind her. “This examination will make clear to you that your charms are for these brave men.”

Jane advanced a few steps into the room, and saw Dr. Quinn standing by the table in his white coat. Stirrups had been fitted to the side of the table, and a blue triangular cushion had been laid down on its white surface. Jane felt her blush grow even more intense as she pictured what she would look like once she had climbed atop it. Her feet halted beneath her.

“Come here, Jane,” said Dr. Quinn, a man of fifty with graying hair. “Get onto the table like a good girl. I’m going to need to perform an examination of your vaginal and rectal areas and show the men what they’ll be bidding on.” Somehow Jane managed to move forward. “Hurry up, girl,” the doctor said, though. “You were already whipped once today. I’m sure you don’t want to feel the strap across that cute little bottom of yours again.”

Something about the way Dr. Quinn seemed to combine clinical language with such winking references to a girl’s attractions made the shame seem even worse. Jane managed to move more quickly, though, thinking of the strap and how much it had hurt. Though the climax to which Mrs. Blenheim had forced her afterward had felt colossal, knowing that all the soldiers were watching, even that kind-looking sergeant, represented the most humiliating experience of her life, and she wanted to repeat that part even less than she wanted another whipping.

“Onto the table, now,” said the doctor. “Knees in the stirrups.”

Trying to forget the audience, block them out of her mind somehow, Jane climbed onto the table and settled back against the cushion. Mrs. Blenheim, standing by, helped her knees into the plastic stirrups. It wasn’t uncomfortable, at least; just horribly embarrassing to have her thighs spread that way.

“There, gentlemen,” said the doctor, standing to the side. “A very pretty vagina, wouldn’t you say? As we did a little while ago with Annie, we’ll get a sense of Jane here’s fuckability, using my fingers and the speculum. Jane, this will be a little uncomfortable, I’m afraid. Try to relax.”

He stepped forward, hands covered in rubber gloves. He held the clear plastic speculum in his right hand, glistening with a sort of jelly that also seemed to cover the fingers of his left. The left hand came down on her pussy and began to rub there. Jane bit her lip at the coolness of the jelly and the indignity of the doctor’s touch.

He began to call out to the men behind him, then. “Yes, there we go. Little Jane’s labia have already become engorged, and her clitoris has emerged. I’ll manipulate her there, now.”

2015-10-31
+admin
Previous: His Lordship’s Little Bride by Ava Sinclair
Next: Taken as Payment by Jaye Peaches