The Shame Gambit by Emily Tilton 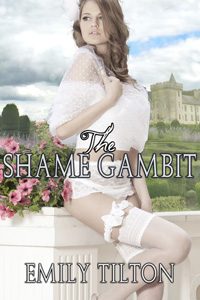 When eighteen-year-old Barbara Edwards agrees to become a model at the Ostia Agency, she quickly discovers that she was recruited for quite a bit more than just some naughty photos.

Barbara will be trained by an agent for the secretive, powerful Praetorian Guard—training which will be more shameful than she could have ever imagined—and then she will take part in an ancient game with the fate of the world at stake and her beautiful body as a playing piece.

Publisher’s Note: The Shame Gambit is a stand-alone book which is the sixth entry in the Bound for Service series, which shares the same near-future setting as The Institute Series. It includes spankings and sexual scenes. If such material offends you, please don’t buy this book.

He turned with the mastix to see that she had twisted her face back over her shoulder to watch him. The act of disobedience, which he could tell came from a subconscious need to test her boundaries and his limits, would help, he thought grimly. He looked into her eyes, not moving toward the bed, until he saw her remember that he had told her in Cynthia’s office that she must always look straight forward when waiting for correction.

Barbara gasped, whimpered, and turned her face to the wall.

“Your conscious mind might have forgotten, columba. The most important part of you—the part that it’s my duty to civilize and tame and teach to reason—that part never forgets.” Now he moved quickly forward, three steps across the little initiation cell suffused with the soft reddish light that filtered in from the Mithraic fire on the other side of the stone arch.

Barbara cried out in fear, and Jean immediately gave her a reason for that fear: he put his left hand on the belt that crossed her back just above her tailbone, to hold her firmly in place for punishment, and he brought the mastix down hard across her young bottom.

She cried out, and her body writhed, her feet kicking up from the stone floor rebelliously. Jean’s hand on the belt kept her well in place, and he aimed his next two lashes at the middle of her thighs where he knew the knotted leather cords would sting even more than they did on her bottom-cheeks. Though her very first struggles had the wildness of terror in them, he could discern to his satisfaction that she had already gotten the fear under control a little, now that she knew what the mastix felt like. It hurt, yes, and a long punishment with the implement provided very thorough correction indeed, but the pain could be borne, and thought through.

“Feet on the floor, slut,” he said severely, whipping her now at what Guardsmen called the double. If Jean hadn’t had to worry about getting her ready for a mission he might well have used the march—one stroke per second—throughout the flogging. Now that she had placed her fright under a bit of rational restraint, though, he had to help her go further, and learn to think even under stern correction.

The word slut made her gasp almost as much as the lashes to her thighs: it, too, represented a part of Jean’s strategy for taming Barbara, though he might well have used it even if he needn’t have worried about a quick deployment.

“Yes, columba,” he explained as he kept whipping her, teaching her through the experience to follow his voice and consider his meaning even under duress, “you are a slut… you are a little bitch… an animal who needs my firm hand… my hard cock… to civilize you.”

Barbara’s lovely backside had begun to glow red, now, with a few darker streaks from the knots. Her body shuddered, her bottom-cheeks moving constantly in an unintentionally lewd dance of pain and pleading for mercy. Her sweet pussy, so enticingly bared by Cynthia for him, showed naughtily between her mobile thighs, and her wrinkly little anus, where she must now feel a man’s hardness for the first time, even peeped out in her writhing.

“Hold still, slut,” Jean said. He slowed the mastix’ cadence to the march and held her more firmly by the belt at her waist. “Offer your bottom to me. Bend your knees and push it out. Show me where I’m going to teach you to be a good girl.”