The Soldier and the Widow by Chula Stone 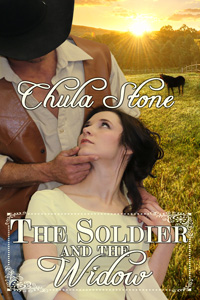 The years since Josh left to join the army have been hard on SueNell. He was her childhood crush, and she had always been sure she would be his wife one day. But with her parents lost to a tragic accident, SueNell was left on her own with a ranch to run and a younger brother to raise, and when another man asked for her hand she saw no choice but to accept. Then tragedy claimed his life as well, leaving her a widow at twenty-four.

Now Josh has returned at last and seems to believe he can waltz back into her life and start over where they left off. Though SueNell knows that a man like Josh would be great to have around—especially with trespassers prowling the ranch up to no good—she is far from ready to start taking orders from him. But when her stubborn defiance puts both the ranch and her own life in danger, Josh takes matters into his own hands and spanks her soundly.

Josh knows that it will take time to earn SueNell’s love, but he is not the kind of man to give up easily. One way or another, he’s determined to win back his girl, and if a firm hand applied to her pretty little bottom is what’s required, he’s more than ready to oblige.

Publisher’s Note: The Soldier and the Widow contains spankings of an adult woman, including domestic discipline in a historical setting. If such material offends you, please don’t buy this book.

He stepped back to allow her to push the blanket off her shoulders. “I’m used to it. Hardly feel the heat any more, but that’s why I brought you here. You’re sure you’re warmed up? No chill? No achiness or fever?”

“Good. Glad to hear it.” Josh reached for her and with one fluid motion pulled her off the bench and took her place. The next minute she was lying face down over his lap. Her skirts had stopped steaming as they dried, but she feared they might start again as he laid into her backside with a will. “I couldn’t spank you if I thought you were going to catch a cold from being down that well, but since you say you’re fine…”

“No, you just fell asleep and tumbled in. And why did you fall asleep in the middle of the day?”

While he spoke, she was mortified to realize he was pushing her skirt and petticoats up above her waist. “Josh, I can’t answer questions upside down like this!”

“Then you can just listen,” he answered hotly. He brought his hand down faster and faster on her upturned bottom. “I know why you fell asleep. It’s because you’re out till all hours of the night every night. You’re not getting enough rest! It’s got to stop. Do you hear me?”

She felt as if her backside were on fire. His hand was harder than any paddle as it slapped down again and again, all over her rump. She blushed to imagine what he must be seeing, with her bare bottom burning so hot that it had to be redder than the metal in his fire. She wailed at the pain and embarrassment overwhelming her, but he paid no attention. The hiss of the neglected coals and the pop of the cooling metal drew her attention only when he paused to let her reply. Grateful for the rest, she took a deep breath and tried to think of some excuse that would convince him to end this punishment. “I will cut back. I promise. I’ll stop everything! I’ll never attend another meeting in my life!”

He growled at that response. “We both know that isn’t true. You’re just at the ‘say-anything-to-make-it stop’ phase. Not nearly ready to see reason, are you?” He renewed his assault on her rump while she bucked and twisted, trying to get away. “I have to keep you safe. I have to show you the error of your ways when you’re not able to see it yourself. That’s my job as your husband and I won’t fail you. Do you at least believe that much?”

His huge palm burned every time it slapped her tender flesh. She simply knew she could not stand one more swat and yet when it fell, she had no choice but to endure. All her efforts to escape came to nothing against his size and strength. “Let me go! Let me go!”

“I won’t let you go! Not now, not ever! You’re my wife and more precious to me than life itself. I have to know that you’ll mind me!”

2015-05-30
+admin
Previous: A Punishment Exam for Jane by Emily Tilton
Next: His Naughty Little Human by Rose St. Andrews