The Soldier’s Girl by Gracie Malling 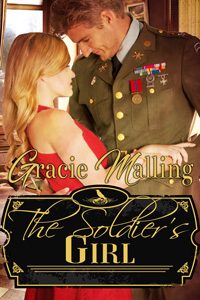 Upon hearing an air raid siren while enjoying a night out in wartime London, Kathy Phipps does what she has grown accustomed to doing—she ignores it. To her surprise, however, she is promptly tossed over the shoulder of handsome American army officer Frank Davis and carried away from the dance hall moments before it is destroyed by the bombing.

Once they are safe, Frank takes it upon himself to chastise Kathy for her recklessness, and she soon finds herself lying over the stern soldier’s lap with her bottom bared for a sound spanking. Frank’s firm-handed dominance sets Kathy’s heart racing, and when he asks to see her again she agrees despite his warning that being his girl will mean submitting to his discipline.

Kathy finds more pleasure in Frank’s arms than she would have ever thought possible, but even as their passion quickly grows into love the reality of the ongoing war cannot be ignored. When Frank departs to lead his men into battle across the channel, will it be the end of their romance or can Kathy dare to hope that he will come back to her when the fighting is done at last?

Publisher’s Note: The Soldier’s Girl includes spankings and sexual scenes. If such material offends you, please don’t buy this book.

Frank positioned her to his liking and, even through her mounting panic, she loved the feeling of his strong hands manhandling her naked body. He wasn’t rough but neither was he entirely gentle and Kathy was reminded of the night they had first met when he had thrown her up over his shoulder without so much as a by-your-leave.

Kathy gasped as she felt Frank’s other leg press up against the back of her thighs, pinning her in place, and then her whole body went still as she felt the cool smooth wood of the clothes brush resting on her bare bottom.

“Why are you being punished, Kathleen?”

For a moment, Kathy couldn’t seem to make her voice work but then she swallowed and the words came. “Because I was rude… I didn’t talk to you… I danced with… with that man… and I ran away.”

“In the future,” said Frank, tapping the brush against her bottom now, “if you’re upset about something, you talk to me. Is that clear?”

The tapping stopped at once and a hard smack with the brush made Kathy shriek. “Yes, what?” said Frank, still in that calm but firm voice.

“Yes, Sir,” gasped Kathy at once, reeling from the burning sting of the clothes brush. Oh, no, it hurt so much more than his hand! How on earth was she going to bear this?

And then the spanking started in earnest. Fast, hard smacks that had her wailing into the quilt within seconds. It was unbearable… and yet she had no choice but to bear it. Frank’s strong thighs kept her bare bottom trapped and thrust upwards for his punishment and his hand gripping her waist kept her pinned down on the bed. She was trapped. There was no escape. She would have to just lie here and take it until such time as he deemed that she had been punished enough.

Oh, but when would that be?

Smack after smack rained down in quick succession and soon Kathy’s whole bottom was a throbbing, burning mass. She bucked and strained against his thighs and his hand but it was utterly futile. She tossed her head back and forth on the quilt and kicked her feet desperately in time with the awful brush but nothing would take her away from the pain. The more she tried to fight it, the harder it was to take.

But Frank simply carried on spanking.

Kathy realised that the power to make it stop was out of her hands.

And that’s when all of the tension went out of her body and she burst into tears.

2017-01-07
+admin
Previous: Her Daddy and Her Master by Katie Douglas
Next: Taking in Dani by Kara Kelley