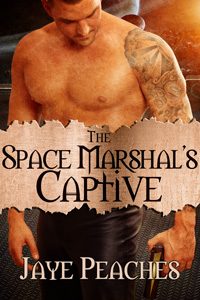 After nineteen-year-old Jade Kryst is caught by space marshal Mason Hadley while trying to smuggle supplies to a rebel-held planet, she quickly discovers that her captor is not a man to be underestimated, and when she fails to cooperate with a thorough strip search she ends up with blushing cheeks and a sore bottom.

Though he does his best to remain professional, Mason is drawn to his beautiful, feisty captive, and he strikes a deal with her. If she will use her skills as a mechanic to keep his ship up and running while he hunts down the dangerous criminals he is pursuing, he will set her free once they are apprehended. Jade accepts his offer, but it doesn’t take long for Mason to realize that keeping her in line will require a firm hand frequently applied to her bare bottom, along with even more humiliating punishments when her continued disobedience makes it necessary.

Despite her status as his prisoner, Mason’s stern dominance leaves Jade burning with desire, and when she surrenders herself to his masterful lovemaking it is better than she ever dreamed. She soon finds herself falling deeply in love with the handsome space marshal, but will there be a place for her by his side after his mission is over?

“Over the table,” Mason ordered.

“What are you going to do?” she stuttered, turning to face the medical exam table.

“Spank that ass of yours until it’s red hot.”

She risked a little sarcasm. “I’m familiar with that approach.” She edged forward, forcing herself to bend. He’d see the line of her slit as she exposed herself. There was little she could do to hide the smoothness of her lips. She’d placed her trust in him before, she could do it again.

“That’s the problem. It isn’t having quite the impact I want it to. So…” He sounded closer than she’d imagined; his voice right by her ear, competing with the thrum of her racing heartbeats. “I’m adding an additional measure.”

Startled, she rose and twisted around to face him. “What?”

He held something in his hands. She hadn’t seen him pick it up. “You’ll have this inside you. A reminder that your obedience is non-negotiable.”

It wasn’t the first butt plug she’d ever seen. Jade couldn’t claim to be an innocent. However, she’d not seen one attached to a balloon pump before. “No,” she gasped. “That isn’t going—”

“It is,” he said firmly. “I’m punishing your ass in a way you’ll not forget.”

“I’m not planning on escaping again, honestly,” she said swiftly.

“Only because you’ve no way of getting off this ship.” He squeezed the air pump and the conical-shaped plug expanded slightly. “This will ensure you obey.”

“Just spank me,” she pleaded, leaning back on the table.

“Bend over now, Jade, and stay still, or else I’ll use those, too.” He pointed at the restraints.

Tears pricked her eyes. “I will be good from now on.”

“That’s nice of you to say,” Mason said wryly. “I’ve heard you say something similar before. This is your last warning—bend over.”

Jade stretched her arms out as she leaned forward and grasped the edges of the table. Her knuckles were white.

“I’m going to spank you ten times on each ass cheek, then insert the plug. Plenty of lube, so don’t fret about the insertion.”

Did he expect her to say thank you? She squeezed her eyes shut. “Whatever,” she spat. She regretted saying it immediately.

The first smack cracked across her behind as he swept his hand upward. She exclaimed loudly—he’d aimed for the crease at the top of her thighs. Without pausing he switched to the other cheek and delivered an equally firm blow. The pain seared instantly and she jerked upward. Over and over, he paddled her ass with the flat of his palm and he counted out each one. She tried to relax and failed. Her bottom flinched, involuntarily tightening, and the unwanted response magnified the effect of the spanking. She hated the pain. Unsurprisingly, each time he clapped his hand across her ass, the intensity rocketed, adding another layer of heat.

There was no escaping now. Nowhere to run or hide. He pinned her down, shifted her feet farther apart and circled her bottom hole with lubricant.

2016-12-18
+admin
Previous: Kept for Christmas by Sara Fields
Next: The Vikings’ Thrall by Ava Sinclair