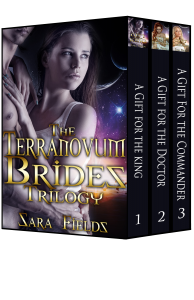 The Terranovum Brides Trilogy is a box set which consists of three best-selling sci-fi romance novels by Sara Fields, all featuring handsome, dominant aliens and the feisty human girls they claim and master. This trilogy includes the following books:

A Gift for the King

For an ordinary college student like Lana, the idea of being kidnapped from Earth by aliens would have sounded absurd… until the day it happened. As Lana quickly discovers, however, her abduction is not even the most alarming part of her situation. To her shock, she soon learns that she is to be stripped naked and sold as a slave to the highest bidder.

When she resists the intimate, deeply humiliating procedures necessary to prepare her for the auction, Lana merely earns herself a long, hard, bare-bottom spanking, but her passionate defiance catches the attention of her captor and results in a change in his plans. Instead of being sold, Lana will be given as a gift to Dante, the region’s powerful king.

But though Dante’s dominant lovemaking brings her pleasure beyond anything she ever imagined, when an escape attempt goes awry and she is captured by Dante’s most dangerous enemy, she is left to wonder if her master cares for her enough to come to her rescue. Will the king risk everything to reclaim what is his, and if he does bring his human girl home safe and sound, can he find a way to teach Lana once and for all that she belongs to him completely?

A Gift for the Doctor

After allowing herself to be taken captive in order to save her friends, Morgana awakens to find herself naked, bound, and at the mercy of a handsome doctor named Kade. She cannot hide her helpless arousal as her captor takes his time thoroughly examining her bare body, but when she disobeys him she quickly discovers that defiance will earn her a sound spanking.

His stern chastisement and bold dominance awaken desires within her that she never knew existed, but Morgana is shocked when she learns the truth about Kade. As a powerful shifter and the alpha of his pack, he has been ordered by the evil lord who took Morgana prisoner to claim her and sire children with her in order to combine the strength of their two bloodlines.

Kade’s true loyalties lie with the rebels, however, and he has his own reasons for desiring Morgana as his mate. Though submitting to a dominant alpha does not come easily to a woman who was once her kingdom’s most powerful sorceress, Kade’s masterful lovemaking is unlike anything she has experienced before, and soon she is aching for his touch. But with civil war on the verge of engulfing the capital, will Morgana stand and fight at his side no matter the cost?

A Gift for the Commander

After she is rescued from a cruel tyrant and brought to the planet Terranovum, Olivia soon discovers that she is to be auctioned to the highest bidder. But before she can be sold, she must be trained, and the man who will train her is none other than the commander of the king’s army.

Wes has tamed many human females, and when Olivia resists his efforts to bathe her in preparation for her initial inspection, he strips the beautiful, feisty girl bare and spanks her soundly. His stern chastisement leaves Olivia tearful and repentant yet undeniably aroused, and after the punishment she cannot resist begging for her new master’s touch.

Once she has been examined Olivia’s training begins in earnest, and Wes takes her to his bed to teach her what it means to belong to a dominant man. But try as he might, he cannot bring himself to see Olivia as just another slave. She touches his heart in a way he thought nothing could, and with each passing day he grows more certain that he must claim her as his own. But with war breaking out across Terranovum, can Wes protect both his world and his woman?

Publisher’s Note: The books of The Terranovum Brides Trilogy include spankings and sexual scenes. If such material offends you, please don’t buy this box set.

Read a Longer Sample of A Gift for the King

Read a Longer Sample of A Gift for the Doctor

Read a Longer Sample of A Gift for the Commander

Excerpt (from A Gift for the Doctor)

Suddenly, a dangerous look came over his face, and a smirk played at the corners of his lips. He removed his hand from in between her legs, drifting his fingertips across the trembling flesh of her inner thighs until his caress grazed against her bottom cheeks.

Morgana tried to squeeze her legs shut, but her ankles were bound too far apart. He had complete access to every inch of her, and from the look on his face, he knew it. A whimper emerged from her throat as he continued to explore the curves of her bottom, before he began to part her cheeks. Her eyes went wide in response. What was he going to do next? He couldn’t mean to touch her there, could he?

His forefinger touched the rim of her bottom hole and she gasped. No one had ever touched her there. Her mind told her she shouldn’t enjoy it and that it should be utterly shameful, but her body was telling her something different, that it was oddly compelling instead of terrible. Hesitant, she focused on what she was beginning to feel develop between her legs, her arousal becoming clearer by the second as her clit pulsed in response to his touch.

Kade circled her tight rosette, all the while spreading her wetness around it. She tried to close her eyes, but Kade’s voice echoed around her.

“I want to see your eyes when I take you here, keep them open.”

“Or else what,” she challenged back, her voice wavering with what she could only identify as desire.

His eyes narrowed, a stern, but slightly amused look coming over him that dared her to push him. His finger invaded her bottom as he leaned close to her. He pushed the tip inside and then pulled it out, over and over until her legs began to quiver. As much as she tried not to, her hips rolled to meet his thrusts, and an unquenched fire begin to flare once again deep in her core.

“Or else I will have to take these cuffs off you, bend you over this table, and give you the spanking you deserve for disobeying me. Are you sure you still want to test me?”

2016-09-10
+admin
Previous: The Firefighter’s Woman by Loki Renard
Next: In Loco Parentis by Emily Tilton