The Trail Boss and the Runaway by Lori Tyler 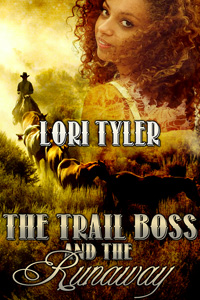 After nineteen-year-old Winnie Freeman is forced to run away from home by the schemes of a murderer, she soon learns that Percival, Texas in 1885 is no easy place for a young woman to make it on her own. So when trail boss Adam Talbert takes an interest in her situation and offers her a job on a cattle drive, she gratefully accepts.

But when Adam questions her about her past and catches her in a lie, Winnie quickly discovers that he is not a man who will tolerate dishonesty. After taking her over his knee for a painful and humiliating bare-bottom spanking, he demands to hear the truth. To her surprise, the handsome cowboy is moved by her tale of woe, and he agrees to bring her on the drive despite the danger that may follow her.

Winnie begins learning the skills involved in cooking on the trail, and as her training under Adam’s strict eye progresses she soon finds that she can’t imagine a life that isn’t by his side. During the long, hard ride to Abilene, Winnie’s stubborn, feisty attitude earns her a sore bottom more than once, yet with each passing day Adam’s feelings for her grow stronger. But can he protect her from the man that sent her fleeing from her home in the first place?

Winnie cut her eyes away from his. Her breathing became labored and unsteady as she made it clear that she had no intention of revealing anything.

Adam’s eyes darkened. “Girl, when I ask you a question from now on, you’re going to answer it, you hear me?”

Winnie visibly pursed her lips as though sealing them shut and stared at the toes of her boots, shivering with a combination of fear and anger.

Adam sighed. “Have it your way.” He pulled out his chair from under the table, and sat down. He then grabbed Winnie by the wrist, pulled her face down across his lap, and secured her around the waist with his left hand.

“This doesn’t concern you, Rosa.” Adam pointed a warning finger at his cook as he held on tight to the squirming girl around her waist. He then lifted the skirt of her dress, only to find that she had just the one layer. It was late February, and the prairie winter had been colder than usual this year. Women usually wore several layers of skirts in order to keep warm in this weather, but Winnie was dressed as though it were already summer. He lifted the skirt higher in search of her pantalets, only to find her smooth silky skin was exposed all the way up to two large, brown mounds of panicking, jiggly rump. She was completely naked under only one skirt, and she fought desperately to prevent Adam from seeing her uncovered backside. She reached back and tried to pull her skirt back down as she whimpered and expelled panicky squeals from her throat.

“I don’t know what you mean! I done already told you my name!” she yelled from her gut.

Adam brought his hand back and swung hard at his target. When his palm connected with skin, Winnie howled and bucked. “Noooo! Please!”

“We both know damned well your name ain’t Mary,” he said gruffly. “Now, who are you?”

She placed her right hand on his knee and pushed to straighten herself up, but Adam pushed her back down almost effortlessly. “My name is Mary!” she screamed out. “I told you…” She started to bawl, her stomach pressed against his thigh almost cutting off her breath.

Adam brought his hand down again with a loud crack as a blossom of pain reached to every nerve ending in her body. She kicked wildly as she dug her nails into the thick fabric of his pant leg. “Aah!”

“Not before you tell me who you are.” Crack!

“Winnie! My name is Winnie Freeman!” She was sobbing now, her shoulders shaking with each short breath.

“Okay, now we’re getting somewhere. And who are you running from, Winnie?”