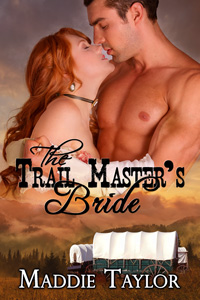 Being cast out of her childhood home by her horrid stepmother and forced into a marriage by her uncaring father were bad enough, but it is only when twenty-year-old city girl Mina Hobart begins the journey west on the Oregon Trail with her detestable new husband that she begins to truly understand life’s cruelty. She hates every minute of each hot, dusty day, and her husband’s constant insults certainly don’t make matters any better.

Mina’s life takes another abrupt turn when tragedy strikes and she is left a widow. The west is no place for a young, newly single woman, and the job of keeping Mina safe—and keeping her in line—falls to Weston Carr, the rugged trail master. Weston quickly proves more than ready to tame the feisty redhead’s careless ways and sassy tongue, even if that means taking her over his knee for a good, hard, bare-bottom spanking.

Unfortunately, even as Mina does her best to learn to cook over a camp fire, make coffee properly, and do the laundry in a creek, jealousy and gossip among the other wives quickly build into significant strife in the wagon train. To quell the gathering storm, Weston is forced to take matters into his own hands and make Mina his bride, whether she likes it or not.

Despite Weston’s rough ways and firm-handed discipline, Mina soon finds pleasure in his arms far beyond anything she has experienced before. But when a series of mishaps befalls the wagon train—incidents in which Mina is the prime suspect—the new couple’s growing bond is badly strained. Can Mina prove she is not at fault before things come to a head, and if she does, will Weston be able to protect her from whichever of their traveling companions is up to no good?

Air across her backside brought her out of her ruminations. She became aware of her husband untying and separating the split in her drawers, baring her bottom to the warm night air. Her hand flew back to cover herself. “What are you doing?”

“You’re a wife now, Mina. Wives get spanked on their bare backsides.”

She began to struggle. “No. This isn’t fair. I didn’t do anything wrong.”

“And that, right there, is why you’ve earned this spanking. If you’d have owned up to these oversights, I would have been more forgiving, but for you to continue to deny them day after day, until one lie builds upon another, when there is no other explanation except your own carelessness, isn’t something I can let slide.”

She heard the crack of his palm first. It echoed in the valley like a gunshot. An instant later, a sting like that of a thousand bees flared across the surface of her bottom. It was followed by another, and another. Then a barrage of searing fire rained down over both her hind cheeks and her upper thighs. Her hand, which had flown back out of self-preservation, had long since been pinned to her lower back by one of his own, all while he kept up a blistering pace of intense swats. She kicked, twisted, and even bent her head and tried to bite him.

Only then did the spanks stop falling. In their place came his angry voice. “Mina Carr!” he growled. “You will stop all this fussing and take the spanking that you earned or you’ll feel the snap of my belt on your willful behind.”

2015-07-12
+admin
Previous: The Doctor’s Little Ward by Ava Sinclair
Next: Bought by the Doctor by Emily Tilton