The Viking’s Captive by Lily Harlem 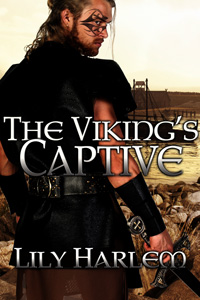 After her village is raided by Vikings and she is carried off and taken as a slave by one of the marauding Norseman, twenty-one-year-old Duna learns the hard way that her best attempts at defiance will merely earn her a painful, humiliating spanking. More shameful still is the inspection of her naked, helplessly aroused body which follows the strict chastisement.

Though he does not hesitate to punish his new slave’s bottom both inside and out when her behaviour warrants it, Halvor cannot deny the effect Duna’s innocence and beauty have on him, and before long he has decided to make her his wife and claim her virgin body properly. But when a man from her village tracks her down, will Duna choose to stay by Halvor’s side?

Publisher’s Note: The Viking’s Captive includes sexual scenes and spankings. If such material offends you, please don’t buy this book.

“I own you,” he said. “Every part of you, inside and out. It’s time for you to understand that, slave.”

She jerked as he set the tip of the ginger plug over her asshole.

“What is that?” she asked on a gasp as she twisted to look over her shoulder.

“Why are you doing this?” She tried to buck away but he trapped her with his legs against hers.

“There is a sting in your words, Duna, and insolence in the way you speak to me. I wish for you to have something else to occupy your mind other than hating me, and having this ginger in your ass will do that.”

“In which case as are many other Viking men who discipline their women this way.”

“The heat won’t grow.” He was enjoying watching her tight ring of muscle open up around the cream-colored root. She was trembling, panting, her body heat was radiating from her onto his flesh.

She groaned as he pushed the plug in farther. For a moment he paused and slid his fingers through her soft folds, spreading the ginger juice into her arousal. But he didn’t push into her entrance; it wasn’t time for that yet.

He smiled at the slickness of her outer lips. She was aroused. Her body was reacting to his attentions again.

“Your cunny tells me a different story, slave. You are enjoying this.”

“You’re an imbecile if you believe that.”

“Really?” He twisted the root.

She groaned and arched her back, pushing her bottom up as if needing more.

Halvor’s grin widened and he gave her what she’d silently asked for. Her asshole widened and took the biggest diameter of the plug before it popped inside her, leaving just the bar outside, so it could be easily removed.

Each one of her breaths was a groan, and her entire body was shaking.

He knew her asshole would feel on fire, as would her cunny lips, but it would reach a limit and then stop. She’d be able to handle it; otherwise he wouldn’t have done it.

“Stand up,” he said, curling his arm around her waist.

She managed to straighten, but then sagged against him and her eyelids fluttered shut.

“Tell me how it feels?” he whispered. “To have my fiery plug inside you.”

“How can that be the case when you are mine? Invasion is attacking something that doesn’t belong already to a person.” He lowered his head and held her closer. “And you are mine, Duna.”

2018-04-29
+admin
Previous: The Slavers’ Pet by Samantha Madisen
Next: Her Alpha Mates: A Shifter Menage Romance by Maggie Ryan and Shanna Handel