The Viking’s Prize by D.W. Collins 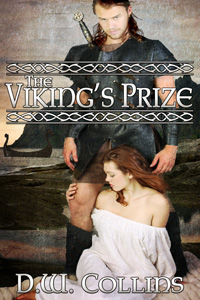 Lady Ina had never sought a husband, choosing instead to devote herself to educating the daughters of the nobility at her small school on the Scottish seacoast. But when a band of Viking raiders sets upon the school and carries her off, she soon finds herself kneeling naked at the feet of not just any man, but Eric Johansson, their chief.

Despite his fearsome reputation, Eric does not force himself upon Ina, though she is not allowed the privilege of clothing as she learns to serve at his pleasure. The handsome warrior expects to be obeyed, and Ina quickly discovers that defiance will earn her a sound spanking. To her shock, his dominance does not merely leave her with blushing cheeks and a sore bottom. It also arouses a burning need within her, and soon enough she aches for him to take her long and hard. But is she merely a temporary amusement for Eric, or will he one day claim her as his wife?

Chief Eric was eating a large, succulent looking leg of lamb at his table when Drifa returned Ina to the cottage. Her arms were tied at both the wrists and elbows and bound behind her back. He smiled and his eyes lingered on her protruding breasts.

Drifa put her on her knees next to the chief and walked out of the cottage silently. Ina’s mind raced as she wondered what the big Viking would do next.

“Drifa has done a good job getting the mud off you,” Eric said as his hand gently fondled an available breast. Ina’s face flushed as its sensitive bud responded immediately. His next words were much more welcome. “Are you hungry, little thrall?”

“Oh yes, master,” she blurted out. “I have not eaten anything but bread and water in many days, and nothing at all for the last two.”

“That will never do,” he said. “You are too beautiful to allow to starve.” His palm caressed her cheek. His skin was rough, but his touch was amazingly gentle.

Without thinking, she moved her face against his big hand. He took hold of her braid and urged her forward until her body knelt next to his. The master did not bother to free his slave in any way. Instead, he used his big knife to carve off a piece of the savory meat and guided it to her mouth. She did not hesitate to open wide and she slowly chewed the delicious morsel while his hand gently stroked her shoulders and upper back. The scene was so tender that Ina almost forgot that she was a bound and naked captive. She accepted three pieces of the meat for each one the master kept for himself.

After a while, he cut a slice from a golden loaf of freshly baked bread, buttered it, and held it so she could use her teeth to tear off pieces for herself. It was so welcome that she had no difficulty ignoring her humiliating nudity for the moment. After a while, her appetite was satisfied, but she had the uneasy feeling that her master’s desire was whetted for something other than food. When he bent her so far forward that her cheek rested on the floor, she realized that her fear was well-founded. He caressed her uplifted bottom and ran a finger along the furrow between her rear cheeks until she began to squirm and whine. A stinging smack to show his displeasure reddened her buttocks.

“You seem to have forgotten again that I am your master,” he barked. “I prefer to give you pleasure, but if you insist on pain, I can give that too.”