The Vikings’ Thrall by Ava Sinclair 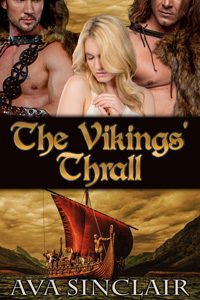 After Morgan MacCallum kills the son of an earl in defense of her home during a Viking raid, the Norsemen take her captive. She is claimed as a thrall by Bjorn and Erik, two huge, handsome warriors who leave no doubt that they plan to enjoy her beautiful body in any way they please.

Bjorn and Erik quickly set out to tame their thrall, and a humiliating bare-bottom spanking soon reminds Morgan of her new place in the world. But though it fills her with shame, she cannot help quivering with desire as they strip her bare and teach her what it means to be thoroughly mastered by two dominant warriors.

Before long Bjorn and Erik find themselves thinking of Morgan as much more than just their thrall, but she is no more than property under Viking law, and keeping her safe in this harsh world will be no small feat. When the powerful daughter of the earl seeks vengeance for her brother’s death, can Morgan count on the men she has grown to love to stand by her side?

Publisher’s Note: The Vikings’ Thrall includes spankings and sexual scenes. If such material offends you, please don’t buy this book.

“No! Don’t!” She felt the hem of her skirt being raised, felt the cool air of the room caress her naked bottom. Morgan moaned from the shame of it. No man had seen her bare, and now two were looking upon her exposed white bottom, and although she’d never been spanked, she instinctively knew this was the punishment they had in mind, and her slim hands flew back to cover her bottom.

“You must not fight.” Bjorn’s order was delivered with a calm, his tone reinforcing the message that chastisement was inevitable.

“Let me go!” she cried as she felt one arm wedged between his body and hers while the other was trapped at her side by his. Immobilized now, she could do nothing, and when the blow came, the sound of it resounded through the one-room cottage, punctuated by her raw wail of pain.

“Don’t! Don’t!” She was rocking back and forth, frightened now. The pain of his heavy hand impacting her bottom sent a wave of pain that sank below the surface of her tender buttocks. Another followed, and another. The hot sting built and built to an unbearable throb that got unbelievably worse with each descent of his hand. She’d never pondered living by someone else’s leave; her father had not been a disciplinarian, and her mother had been gentle and patient to a fault. But this man—this savage brute who’d told her she would obey—seemed determined to school her in that very reality as he spanked her bottom.

Morgan was vaguely aware that he’d loosened his grip enough for her to twist and writhe and buck. Bjorn’s thighs were broad and rock hard under her middle, her bottom fire poker hot and unbearably sore, her throat strained and achy from her cries, her face plastered with strands of tear-soaked hair.

She felt the punishing hand fall one last time, the searing slap ending in an excruciating squeeze of a buttock that pulsed with pain. The hand slipped down to her thigh, the fingers between her legs, and she was aware that one of those fingers was just brushing the tight curls between her legs, and through the pain she felt something else—something jarring—an inexplicable jolt of sensation that resolved to a tight throb between her legs. And that feeling, so odd, so alien, frightened her more than the spanking had.

Morgan sought to close her legs, but could not without squeezing his hand between them, without bringing it closer to her secret core.

“There now.” Bjorn’s voice rose over her cries that had grown low and hoarse. “You’ve learned the price of disobedience, so you’ll obey now, no?”

She could not respond, but nodded her assent, hoping her compliance would prompt him to leave her alone. But when she lifted her head, she saw Erik kneeling before her.

“Such a sweet little thing now that she’s been brought to heel,” he said, pushing a strand of hair away with his thumb, and Morgan had never felt more uncomfortable, looking one man in the face while still restrained over the lap of a second, his hand lingering between her legs.

2016-12-18
+admin
Previous: The Space Marshal’s Captive by Jaye Peaches
Next: Claiming Their Princess by Sue Lyndon