The Virgin Captive by Kallista Dane 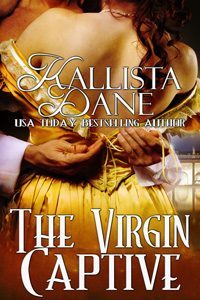 When her sister disappears from a finishing school in San Francisco and a well-known detective agency proves unable to track her down, Victoria Bennett leaves Boston and boards a train for California, planning to enroll at the school herself in order to continue the search in secret. But traveling across the country in 1883 is not without danger, and when train robbers corner Victoria in her sleeping berth it is only through the boldness and quick thinking of brash, handsome fellow passenger Ben Hudson that she is kept safe.

Though he does his best to convince himself that Victoria is far too prim and proper for his tastes, Ben cannot keep the beautiful, spirited young woman off his mind, and the day after their arrival in San Francisco he decides to call upon her. When he arrives at the finishing school where Victoria had planned to enroll, however, he is informed that no student there matches her description. Now certain that something is deeply amiss, Ben begins an investigation of his own.

After being shown to her room on her first night at Miss Cora Holmes’ academy for young ladies, Victoria is shocked to awaken in an unfamiliar place. More disturbing still is the fact that she is naked, bound, and helpless. Her humiliation only increases as she is thoroughly and intimately examined in front of a room full of men, and her efforts to resist the shameful procedure merely earn her a stern punishment which leaves her bottom sore both inside and out.

Victoria soon discovers that she has been taken captive for a very specific purpose. She will be trained not only to obey every command of her future master, but to beg for more as she is bared, punished, and made to please him in any way he demands. Once her training is complete, she will be put on display before an audience and auctioned off to the highest bidder. But when a man claiming to be a potential buyer turns out to be none other than Ben Hudson, does it mean that she badly misjudged his character, or can she dare to hope for rescue?

“You won’t be rewarded with any pleasure tonight,” the doctor declared. “That must be earned—with proper, submissive behavior to your new master. And you’ve got a lot of work to do with Nurse Emery before you’re ready to be given to one.”

He walked over to the table at the side of the room, donned a pair of rubber gloves, and came back carrying a jar and one of the strange instruments.

“Now then, time for the rest of the procedure.”

Dipping a gloved finger into the jar, he coated it with some sort of glistening ointment.

“Gentlemen, please raise the stirrups to their maximum height and lock them in place. Thank you. Now, look at me, my dear.”

Tori’s hips came up off the table as her knees and ankles were lifted higher in the air. The doctor’s eyes held hers in a hypnotic gaze as his hand disappeared between her legs.

The next moment her eyes widened in shock as his finger rimmed the puckered entrance to her back passage.

“You’ll find this delightful, gentlemen,” the doctor announced. “See the look in her eyes? She’s tightened down so nicely, making the breech a real challenge. It will be all I can do to get this one finger in.”

As he spoke, he pressed against her bottom hole. Tori whipped her head from side to side, moaning wildly. But she was powerless to resist. Arms tied over her head. Thighs held wide apart by two masked strangers. Knees and feet high in the air, strapped to metal stirrups. Her nether region was his to do with as he wished.

He applied more pressure, watching her face the whole time. Coated with the slick substance, the tip of his finger slid in. Tori groaned, deep in her throat, as he slowly, relentlessly penetrated her further.

“Ahhh. There’s nothing like the feeling of a tight little ass. But don’t worry, gentlemen. We guarantee that it won’t be too uncomfortable for you. Normally we’d wait, but as part of her punishment for misbehaving so badly in front of guests, we’ll begin her anal training tonight. By the time she’s ready for the event, she’ll be capable of opening up enough to accept the head of an erect cock without causing discomfort to the one who wields it. However, the pleasure of taking her there fully will be reserved for whoever is fortunate enough to become her new master.”

2016-06-25
+admin
Previous: Claimed on the Frontier by Jane Henry
Next: Taken by Her Mates by Grace Goodwin