The Viscount’s Pet by Kryssie Fortune 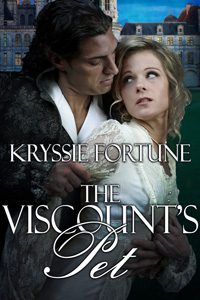 When her brother tries to force her into a marriage with a detestable baron, Julianna Halstead flees the family estate she has helped manage since the death of her parents. But as she makes her escape late at night, Juliana’s carelessness nearly results in her being trampled by a galloping horse, and the steed’s handsome rider takes it upon himself to correct her right then and there.

Though having her bottom bared and soundly spanked on the side of the road leaves Juliana blushing crimson, the punishment arouses her intensely and her body’s helpless response cannot be hidden. To make matters worse, the gentleman over whose lap she was so firmly chastised turns out to be none other than Viscount Stonehurst, someone she has known since childhood.

When Stonehurst learns of Juliana’s predicament, he decides to make her his bride. She will be no ordinary wife, however. She will be something much more shameful. But even as she is leashed, collared, and put on display in a cage wearing only a tail, then brought out to be used in ways no proper lady should enjoy, will Juliana come to love her new life as the viscount’s pet?

Publisher’s Note: The Viscount’s Pet is a stand-alone novel which shares the Regency-era setting of Wickedly Used and His Innocent Bride. It includes spankings and sexual scenes. If such material offends you, please don’t buy this book.

She curled next to him, legs on the cushions, head on his knee. He ran her curls through his fingers then rubbed her shoulders. Gradually, his movements turned sexual, and he cupped her mons. “Tomorrow, I’ll shave this and bare you for my pleasure.”

She blushed and clamped her knees together at the thought.

When he tugged at her nipples, she tried for a purr. It came out strangled but happy. His contented smile said he’d enjoyed being her owner as much as she loved becoming his kitty. “Good girl. Already so damp and eager for your master.”

His fingers curled against the sensitive places inside her and teased her to the brink of orgasm. Stopping, he lifted his hand to his lips. Eyes as big as saucers, pussy tingling with need, she watched him taste her intimate juices.

His smile brimmed with carnal delight. “I promised to fuck my kitty cat when she learned to be good. Lean over the sofa again and I’ll make you come so hard you can’t think straight. Do you want that? Do you ache for me to screw you? Do you crave my cock buried deep in your cunt?”

His dirty words thrilled her. She stood slowly, hips swaying as she held the tip of her tail in one hand. “With you, I want all that and more. Please, Master, I’ve been a good kitty, and I deserve my reward.”

She needed the plug out of her rear hole before he did though. Eager, she leaned over and wiggled her behind like a cat on the hunt.

He patted her bottom. “I love your honesty; in fact, I love everything about you.”

His words sent a thrill through her bones. He’d said he loved her, and nothing mattered more than that.

He stood between her thighs, forcing her knees apart. She expected him to remove her tail, but he stroked and caressed her clit. “Already so wet for me.”

Reaching around her, he removed the clamps from her nipples. The blood rushed back, making them burn and sting. She whimpered and tried to move away.

He slapped both of her bottom cheeks. “Stay still or we stop.”

Consumed by her needs, she panted but stilled. Her heart rate spiked as she heard his clothing rustle. Nervous, more aware of the toy tormenting her dark passage than ever, she mewled softly.

In one slick motion, he slid his cock into her pussy. As he filled her to overflowing, his hand on her neck kept her pinned her in place. His possessive growl and masculine dominance thrilled her.

As he pumped his shaft in her tight channel, he shoved the butt plug in and out of her bottom hole. The dual fucking felt wicked and desirable. She’d never been so full or so eager. His masterful touch woke primal needs in her soul, and she screamed out her climax. Her legs turned weak, but her spirit soared.

His cock swelled inside her. Eyes closed, he groaned as he came hard. Sperm peppered her womb in a cannonade of delight. Thighs trembling, she slumped forward, too exhausted to stand.