The Warlord’s Pet by Loki Renard 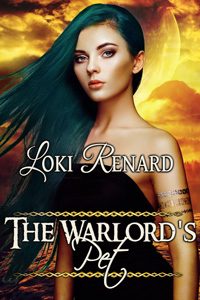 Eighteen-year-old Celeste Casperia is accustomed to the privileged status which accompanies her position as the daughter of the governor of several star systems, but after her father provokes a conflict during a meeting with a powerful rogue general and then flees for his life, she suddenly finds herself held captive by a man with no concern whatsoever for her dignity.

When the daughter of his arrogant but cowardly rival ends up as his prisoner, General Alistair Clark sets out to teach the proud, defiant girl a lesson in humility. He informs Celeste that from now on she will be his pet, and as such she will learn to kneel at his feet, eat from his hand, wear his leash and collar, and obey his every command if she wishes to avoid his firm chastisement.

Celeste is left blushing crimson as she is stripped bare and put on display, and her attempts to resist her shameful ordeal merely earn her a deeply humiliating bare-bottom spanking. Yet in spite of her circumstances, she cannot deny her body’s response to the general’s dominance, and soon enough she is begging for him to take her hard and thoroughly. But when her father seeks vengeance against Alistair and his entire world, will she come to the aid of her new master?

Publisher’s Note: The Warlord’s Pet includes spankings and sexual scenes. If such material offends you, please don’t buy this book.

“There’s not a part of you I don’t own, pet,” he told her. The words weren’t necessary; his actions told her everything she needed to know. The message had been received by her body loud and clear. The plundering of her bottom continued in long, slow strokes.

Was he trying to prove a point? Had he somehow sensed the rebellious thoughts she’d had in her cage?

Perhaps, but that was not his primary aim. That became apparent when he pulled something out of his drawer and showed it to her. It was a dark tapered rubber plug with a flared base… and from that base a flowing length of hair that could only be described as a tail. It matched her teal locks perfectly, and she realized that he must have had it made for her.

“This is your tail, pet,” he said firmly, but gently. “This is what you will wear in your bottom.”

She clamped her lips tighter together. She was not going to give him the satisfaction of begging him for clemency.

He made a little tutting sound. A moment later she felt the thick rubber pressing into her tender little hole, settling deeper and wider than she had anticipated. It was a relief when the narrowed neck just before the flared base of the plug allowed her bottom hole to close a little more around the intrusion. The long, soft strands of the tail brushed against the inside of her thighs. It was in. With every motion she made she could feel both the plug being held inside her bottom and the length of the tail brushing against her thighs.

“You see?” He purred the question down at her as he manipulated the tail and plug gently to make the thick rubber swirl inside her anus. “It feels good, doesn’t it?”

“No!” She growled the lie through gritted teeth.

“Then why are your juices already slick on your tail, pet? Why are you so wet we could use you to irrigate the crops?”

Celeste blushed furiously. The more he took from her, the more her body seemed to respond.

“I don’t care what my body is doing,” she grumbled. “I hate you anyway.”

“Hate,” he repeated in teasing tones. “It doesn’t feel like you hate me.”