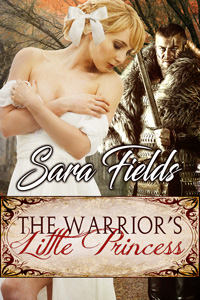 Irena cannot remember who she is, where she came from, or how she ended up alone in a dark forest wearing only a nightgown, but none of that matters as much as the fact that the vile creatures holding her captive seem intent on having her for dinner. Fate intervenes, however, when a mysterious, handsome warrior arrives in the nick of time to save her.

Darrius has always known that one day he would be forced by the power within him to claim a woman, and after he rescues the beautiful, innocent Irena he decides to make her his own. But the feisty girl will require more than just the protection Darrius can offer. She will need both his gentle, loving care and his firm hand applied to her bare bottom whenever she is naughty.

Irena soon finds herself quivering with desire as Darrius masters her virgin body completely, and she delights in her new life as his little girl. But Darrius is much more than an ordinary sellsword, and being his wife will mean belonging to him utterly, to be taken hard and often in even the most shameful of ways. When the truth of her own identity is revealed at last, will she still choose to remain by his side?

“Such a naughty little girl,” he chuckled. “Now face the wall and put your chest on the bed. Then, I want you to reach back, grip your bottom cheeks, and spread them for me. Show me your naughtiest hole.”

She gasped at his words, shocked but compelled to obey him. Slowly she leaned down and reached back, feeling the residual warmth from her spanking on her naked skin. When she grabbed both sides of her bottom, she had to take a deep breath before following through with his command. When she eventually obeyed, she felt an odd sense of pleasure intermingled with inherent shame race through her body.

Her mind was telling her that she should be ashamed and embarrassed of how her body was reacting, yet she didn’t feel as though she should be. This is what Darrius wanted and he promised she would enjoy herself. Her bottom cheeks clenched in anticipation, wondering what he would do to her next.

She heard him rummaging in a nearby drawer, but didn’t dare look since she had been told not to. When he finally touched her, she sighed. His rough fingers glided across her back and down the cleft of her bottom, grazing over the tight rim of muscle usually hidden from view. Despite her best efforts, her hips rocked toward him and she felt liquid heat gather between her thighs. Without a doubt, this very act was proving to be more arousing then she could have ever expected.

“You can’t mean to touch me there,” she yelped.

“I most certainly do and you’re going to love it.”

The sound of a jar opening met her ears and she shrieked when a cool sort of cream spread on top of her bottom hole. His thumb rubbed over her tight rosette and it began to feel rather good. She moaned slightly when he began to put pressure on her rim of muscle, finally realizing his intentions. He would circle and ultimately push into her secret entrance.

“Open for me, baby, let me in,” he implored her as he pressed harder and she finally relented. His large digit pierced into her channel and she moaned when he began to move inside her. First he started with his thumb, spreading the cool cream around her bottom hole and deep inside her.

The feeling was foreign, but utterly pleasurable. She loved it. He continued working his fingers inside until he could comfortably fit a few inside her at a time. Then, he pulled his fingers out of her and she whined at the empty feeling. She moved to look back, but he quickly told her not to move.

A cool object pressed at her backside and she whined nervously.

“It’s a glass plug. I bought it earlier today for you and wanted to surprise you with it. I’m going to put it inside your bottom to remind you that your daddy will always be there for you.”