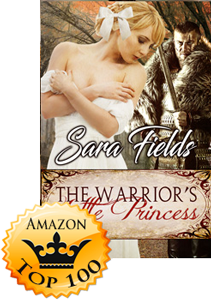 ★★★★★ Kindle Customer David W @ Amazon.com “A very enjoyable read!” on March 2, 2017
I am a big fan of Sara Fields and have read all her books to date. This story throw me of guard because I just thought it was just an age play book.
There was magic, princesses, kings, Warriors and such.

The story was an Adult Fantasy fairytale kind of book with a lot a great detailed spankings and some sex play scenes. Darrius a Necromancer that uses his magic to find Irena who was about ready to get eaten by the goblins. Darrius was the alpha strong male with gifted powers from being a necromancer and Irena who had lost her memory when found by Darrious was your sassy beautiful young Princesses of sort with a very submissive nature. The two main character were two very lovable characters which seemed they were made for each other as a Daddy and baby love connection. Ageplay with an adult setting with no diaper changes and silly stuff as such to my relief.

For a very fun and cute read with fantasy as magic and other fairy tale stuff in an adult setting that is filled with great spanking and sex play then this is a must read. Highly recommend this fantastic read from Ms. Fields.

★★★★★ Renee @ Amazon.com “Necromancers? As a Daddy Dom? Oh yeah… he rocks it perfectly” on February 25, 2017
Sara Fields is a fav author to begin with but she has outdone herself with this book. This is a prime example of age play done superbly. Darrius is such a great character. I mean who even knew necromancers could rock the Daddy Dom so well? Irena’s character was so sweet yet sassy at the same time. A very sexy read that you won’t want to miss.

★★★★★ Stats23 @ Amazon.com “Romancing the Necromancer” on March 5, 2017
I am not usually a big fan of stories that include supernatural abilities and what I would consider paranormal activities but this one is a major exception. In this story the “necromancer”, Darrius, has the ability to see and hear far beyond the range of normal humans, as well as other strengths. Irena, a beautiful young maiden who has lost all memory of who she is and where she is from, is rescued by Darius and his two friends, and then falls under Darrius’ protection and guidance. A major part of his “guidance” is the firm discipline of her to help her behave properly and to be safe. However it turns out that Irena actually enjoys being spanked and is extremely turned on by just the thought of it let alone the actual occurrences. Her absolute love of the discipline, and of Darius, grows with each spanking even as the harshness and severity also increases. The story does come to a natural conclusion when she regains her memory, and there are a few twists, but I am sure you will be happy with the outcome. Lots of spankings, lots of graphic and erotic sexual awakenings, and a very strong loving romance. An unequivocal 5 stars.

★★★★★ Bookworm555 @ Amazon.com “Sweet!” on February 25, 2017
I really enjoy Sara Fields’ books. This story is totally sweet and I loved Darrius. Darrius is protective of his new charge and does his best to help her in any way he can. Due to his nature, Darrius will be forced to procreate willingly or unwillingly. Because of the actions of Necromancers in the past, Darrius is feared by most everyone and with Irena’s lack of knowledge about his nature, they grown closer. As Darrius falls in love with his charge and wants to marry her, her real identity is discovered. Darrius proved to be such a fantastic hero all through the story – both while protecting the people and then again while caring for Irena. I loved how the author handled the last 1/4 of the book (after Irena’s identity is revealed) and the fact that she gave us an epilogue. There are some unanswered questions for me but they are inconsequential to the actual story. Just grab this book and enjoy it.

★★★★★ Steph @ Amazon.com “Sexy Daddy Dom and Sassy submissive” on February 27, 2017
Darrius and lrena relationship starts by Darrius using his powers to save lrena from being eaten by trolls; from there he will do everything possible to protect and care for her.This book has great age play elements no bottles or diapers, but rather a sexy, chemistry between two people, and the love and nurturing that came along with building their relationship

★★★★★ kristen h @ Amazon.com “great story” on February 26, 2017
This is a great story coming from Sara Fields. It’s a great change of story setting, with good fantasy elements. overall it was good.

2017-03-05
+admin
Previous: Summoned for Discipline Calls a Top 100 Spot to the Headmistress’ Office
Next: Undercover Daddy by Katherine Deane