The Warrior’s Mate by Samantha Madisen 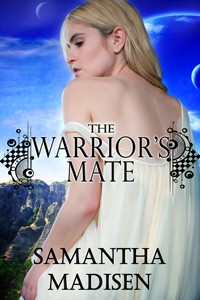 For generations maidens of Adena’s people have been taken as brides by the powerful men of the Tlani clan, in tribute for their continued protection, and when she comes of age Adena is given to the mighty warrior Lor Quinn. Stripped bare and displayed before the assembly, her suitability as a mate is tested and confirmed for all to see before she is claimed publicly by her new husband to consummate their union.

Lor’s dominant lovemaking excites Adena far more than she ever would have thought possible, but it is only when she is led to Lor’s training chamber after the ceremony that she begins to fully realize what it means to belong to him completely. He will explore her body thoroughly, punishing and pleasuring her as he wishes until she is left blushing crimson with shame yet still aching with need and longing for him to take her in any way he pleases.

Adena soon discovers that Lor’s plans for her extend beyond their bedchamber, and as part of her training she is brought to a doctor for an intimate, humiliating examination as often as her husband feels it nececessary. Any defiance merely earns her a hard, bare-bottom spanking, yet though his firm-handed dominance often leaves her with flaming cheeks and a sore bottom, as Lor’s mastery of her body deepens Adena’s passion for him burns hotter every day. But can she truly learn to embrace life as a warrior’s mate?

“Why do you… put the plug in?” I asked quietly, turning my eyes down at the last few words. More hot shame flashed across my cheeks. His finger on my chin tilted my face until I was looking at him again.

“So you know you are mine. So that when you stand, your ass juts out and your breasts do too. So that others will see what a fine wife I have. To show you off, I suppose.”

“To show me off! But no one but you will see me like that!”

“I know it’s a lot to take in all at once, isn’t it? I’m not the only one who will see you like that. The doc and Nis have already seen you. More will see you still.”

“Like who?” I blurted, ashamed already that I would be put on display for others the way I had been for the three men who’d left.

“What? I will not! I will not be made to do that, to… to… to take that thing inside me and show people!” Just the thought of it was making me red with embarrassment and shame. What was he going to do, put that thing into me and then parade me around for everyone to see?

“Come now, beautiful. You know enough to know that you’ll do as I say.”

“I won’t!” I cried and rolled over onto my side, curling up into a ball.

“You will, or you’ll be spanked,” Lor said gently over my shoulder. I sniffed at a tear that had started down my cheek but his words made me squirm. Though I was ashamed of the fact, the truth was that I wanted him to spank me again. A part of me wanted to feel the heat of his palm as it reddened my buttocks.

2015-11-07
+admin
Previous: Her Noble Lords by Ashe Barker
Next: The Code of the West by Kelly Dawson