The Warrior’s Pet by Samantha Madisen 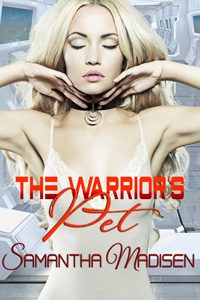 After she is captured, enslaved, and sold, Aveera’s first introduction to her new owner comes in the form of a humiliating inspection and a bare bottom spanking, and she soon discovers that this shameful ordeal is just the beginning of what is in store for her in her new life as an alien’s pet.

Though Drak is forbidden from breeding with a female of another species, nothing prevents him from enjoying Aveera in any other way he pleases, and he intends to use her beautiful body very thoroughly. But when his dominance awakens an uncontrollable urge to mate within his pet, will Drak cast aside law and custom and risk his life to claim Aveera before her need consumes her?

Publisher’s Note: The Warrior’s Pet includes spankings and sexual scenes. If such material offends you, please don’t buy this book.

Drak raised his hand, palm up. “Bring me a flogger, Maati,” Drak said. “The one with fat, soft tassels. I don’t want to be called a barbarian.” His eyes narrowed as he spoke.

Aveera sucked in a breath. Had it been a coincidence? Or had she said it and simply not remembered? How did Drak know that was the exact word she’d wanted to use?

Maati shuffled across the room, opened the drawer, and pulled out another implement. It was a slightly thicker rod. Attached to the end were fat fronds of material that swished and swayed through the air as she moved. She placed it in Drak’s outstretched hand.

“Thank you, Maati,” he said, smiling. He stepped to the side of the bed, at the periphery of Aveera’s vision. “While their minds may be supple, as you said, they are not supplicant. At least not right away. Perhaps it is this that drew me to this one. What is your name, pet?” he asked.

Aveera’s mouth went suddenly very dry. She swallowed a few times, trying to moisten it enough to speak. “Aveera.” Her name came out as a hoarse croak.

“I thought so too, my lord,” Maati offered.

Something swooshed behind Aveera. A moment later she felt the ends of the dangling fronds graze her sex. Her body stiffened at the half-painful, half-pleasurable sensation.

“Perhaps Maati did not have time to explain. When your master asks a question…” He trailed off. Another swoosh. The fronds splayed against her wet lips. “You answer.”

The fronds lifted. A much sharper sound filled the air.

Razors of pain sliced along Aveera’s backside, shooting tendrils of it up her spine. Her mouth fell open and a shout shot out. Forgetting herself, she lurched forward trying to avoid more of the same.

In a flash Drak grabbed a fistful of her hair and yanked her head back. He pulled, bringing her to the position she’d been in a moment earlier. The flogger sliced through the air behind her.

Pain flared through her back cheeks. She screamed again and tried to move forward but Drak held her fast.

The fronds lifted, slashed through the air, then thwacked down on her ass again.

Her body shook. But this time she managed to control her voice.

Another swipe followed by more hot pain blossoming along her rear.

Instead of screaming, she took a deep breath and braced herself for more still.

But this time Drak let the fronds linger on her backside. He twisted them slightly, the tickling feeling mingling with the burn of his correction.

Aveera took another deep breath, steadying herself, now suddenly knowing that this was what was expected of her. To take her punishment without moaning or screaming. Possibly even to ask for more.

“You are right, Maati,” Drak growled. “She learns quickly.”

Aveera found herself disgusted by the pride that swelled inside her. Drak was right. Humans were a proud species. But how could someone possibly be proud of this? Proud at having submitted so quickly?

“Now let’s try again,” Drak said. He let the flogger fall onto the bed and walked around the edge to come standing in front of Aveera. “Are you ashamed, pet?”

More blood rushed to her cheeks as she looked up into his eyes. But she knew she wouldn’t be able to bear another correction. Not so soon after the last one. Her ass felt like it was on fire. “Yes, Master,” she whispered. “I am ashamed.”

One corner of Drak’s lip curled into a half-smile. “Very good,” he rumbled. “Very good indeed. You see this, Maati? How red her face is? That is caused by the shame. Now let’s see how red it gets while you watch her take my cock in her mouth.”

2019-04-26
Chris
Previous: Captured and Claimed: An Alpha Shifter Romance by Delta James
Next: His Errant Ward by Celeste Jones