The Warrior’s Property by Vonna Harper 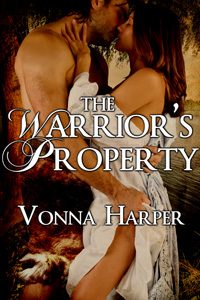 After Rima’s tribe is defeated in battle by their enemies, she is given to the powerful warrior Karr as a token of her people’s surrender. But Rima is the daughter of a prince, and even when she is brought to Karr’s tent, stripped bare, and made to kneel at his feet, she is far too proud to fully submit to her new master.

Karr is not a man who tolerates disobedience, however, and it isn’t long before Rima’s defiance earns her a painful spanking on her bare bottom. The humiliating punishment leaves her cheeks blushing and her bottom on fire, yet Karr’s stern dominance also arouses Rima far more than she could have ever imagined, and she soon finds herself aching for his touch. But can a woman like her truly find happiness as a warrior’s property?

He cut her off by flipping her over so she was on her belly and could no longer see him. She tried to return to her previous position, but his greater weight, mostly settled on the backs of her thighs, stopped her.

So this was what it felt like to be possessed.

“It’s obvious you’ve either forgotten or choose to ignore my warning. Our relationship is simple—captor and captive. Neither of us can change that. We must accept our roles. You will do as I say without argument, understand?”

She reared back and up as far as possible. “Let me go!”

His voice had become too calm. She sank back down, not that she had much choice. She turned her head in an attempt to see his expression. Her arms were by her sides and useless.

“Lovely.” He patted both ass cheeks. “Warm and full. Perfect for receiving correction.”

He silenced her with a harsh blow on her right cheek. She was still coming to terms with what had happened when he struck her on the left. A gasp erupted from her. Alarmed by how vulnerable she was, she rocked back and forth in a desperate attempt to escape him. But all she managed to accomplish was to sink deeper into the bed. She hated her helplessness and yet—

2016-07-23
+admin
Previous: An Old-Fashioned Homestead by Katie Douglas
Next: A Gift for the Commander by Sara Fields