The Warrior’s Woman by Vonna Harper 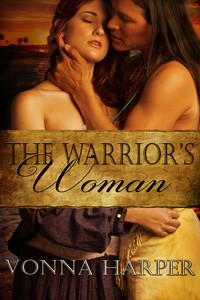 Desperate to escape the sadistic army colonel who has kept her as his prisoner, nineteen-year-old Alika casts herself into the sea during a powerful storm, hoping that the raging waters will carry her far beyond her captor’s reach.

When Yahola, a Seminole warrior, retreats to a remote island to commune with his spirit animal, he senses the impending storm. What he doesn’t anticipate is finding a beautiful young white woman floundering in the surf, and while the half-drowned girl is initially fearful of him, Yahola takes it upon himself to care for her.

Though Alika has long known only cruelty, to her surprise her handsome rescuer treats her with kindness, setting out to show her that a man’s loving touch can bring comfort. Yahola’s world is very different from her own, however, and when her failure to obey him puts her in danger, Alika quickly discovers that the dominant warrior will not hesitate to pull her over his lap and soundly spank her bare bottom if he feels it necessary.

Yet in spite of his firm-handed correction, Yahola awakens passions in Alika that she never knew existed, and his mastery of her body soon brings her pleasure beyond anything she ever imagined. But with the colonel still seeking to hunt her down, can she trust in her newfound protector to keep her safe?

He remained motionless as she presented herself to him. Then he grabbed her upper arm and hauled her over to a mangrove tree with exposed roots. He sat on a thick root and pulled on her arm, forcing her off balance. She landed on her stomach on his thighs.

“I will make sure you listen to me. Listen and obey.” He planted a broad hand over the back of her neck, preventing her from trying to get away.

She was still trying to convince herself that she was dreaming when his fingertips dug into her buttocks. She squealed and pushed her toes into the ground, hoping to leverage herself so she could escape.

“You are my responsibility.” He forcefully rubbed her right ass cheek. “If I am to keep you alive, you must do what I tell you to.”

He slapped her left cheek, the sound like a drumbeat. “I cannot call myself a warrior if I do not do everything I am capable of to keep you safe.”

He was spanking her, delivering measured blows to her throbbing flesh. She didn’t know what to think, couldn’t think. Couldn’t begin to plan how to struggle.

Pain spread over her buttocks, ignited by the barrage of smacks Yahola was delivering. The longer he spanked her, the harder it was to remember she was a separate human being. At the same time—not that she wanted to admit it—she felt a kinship with the Seminole. He wasn’t punishing her simply to demonstrate his dominance. He needed her to absorb his lesson, to accept his dominance.

Finally, with her ass ablaze, the blows slowed and became less intense.

“No, you should have not.” He followed up his comment by running his hand between her ass cheeks and pressing against her rear opening. “You will not disobey again, will you?”