The Ways of the West by Kelly Dawson 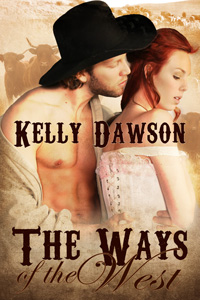 Orphaned by an attack on her family’s wagon train, Jessica finds herself stranded a thousand miles from Boston, the only home she has ever known. Only one man—a rough, dusty cowboy named Johnny—stands between her and the perils of the West, and he quickly makes it clear that he is ready to do whatever needs to be done to keep Jessica safe… whether she likes it or not.

When the unlikely pair stumble upon a cattle drive and they are offered employment, Johnny doesn’t hesitate to accept. But after Jessica loudly expresses her disdain for his plan and for cowboys in general, Johnny decides it is time for drastic action. After a hard, embarrassing spanking followed by a tearful apology to the trail boss, Jessica is left with both a sore backside and a strange yet undeniably powerful need to be held close and comforted by her handsome protector.

With Johnny by her side—and claiming an ever bigger place in her heart with each passing day—Jessica begins to adjust to life on the trail. But a cattle drive is a dangerous place for anyone, let alone a city girl with a penchant for disobedience. If he ever wants the chance to make Jessica his wife, Johnny knows he’s going to have to take her firmly in hand before she gets herself hurt or killed. Even if it means a painful, humiliating bare-bottom strapping she’ll never forget, one way or another he’ll teach her the ways of the west.

“Oh, no.” Jessica shook her head, disgust dripping from her voice. “No way. I’m not staying with a bunch of filthy, stinking cattle men! Drovers smell! We’re not staying here!” She stomped her foot, sending a cloud of dust swirling up around her, making her cough. “I didn’t come all the way out here to play nursemaid to a herd of stupid cattle!” she declared between coughs. “I want to go home!”

Mr. Jordan frowned, then turned away. “I’m sorry you feel that way, miss.” He strode back toward the camp, his fists clenched tightly by his sides in anger.

Jessica could feel the men’s eyes on her. Had they heard her? She hadn’t spoken that loudly, had she? Gulping, she knew that she had. Her objections hadn’t been spoken softly, purely for the benefit of Johnny’s ears. No, she’d shrieked her outrage loudly at the very idea of making camp with these men; they would have to be deaf not to have heard her.

She felt Johnny’s hand grip her arm, then she squealed as he hauled her roughly up in front of him on his horse, draping her belly-down across his saddle, her body balanced precariously on his legs and dangling down either side of the horse, the saddle horn pressing into her side.

“Put me down!” she shrieked, crying in outrage and pain as Johnny started whaling away on her backside with his huge, hard palm. He wasn’t holding back any either, as he swatted her again and again, making sure she was fully aware of how much her rudeness and lack of respect displeased him. The horse side-stepped beneath them as each blow landed, the sound of the swats and Jessica’s accompanying yelps echoing across the plains.

Jessica was mortified. Not only that, she was in pain; it felt like her entire rear end was on fire! “I’m sorry! I’m sorry!” she yelled, tears streaming down her face. She was kicking and struggling, but Johnny was holding her firmly; there was no escaping the wickedly hard blows he was landing with precision. The layers of dress and petticoats should have afforded her more protection from the pain than what they did, but Johnny simply made up for the layers of clothing by laying into her harder.