The Westerfield Affair by Renee Rose 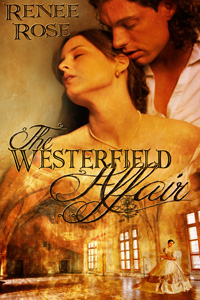 Reserved to the point of being aloof, Lord Westerfield never attended balls or even considered taking a wife… until he met Miss Kitty Stanley and his orderly world turned on end. Determined to have the beautiful and animated sister of his friend from the gambling hall, but doubting his ability to effectively court her, Westerfield strikes a bargain with her brother for her hand.

When the gentlemen present Kitty with the deal, she is furious with them both for neglecting to consult her, but her brother insists he will withdraw his support if she does not comply. Angry, she acts out at a ball, causing a scandal that mushrooms further when Lord Westerfield drags her unchaperoned to his home for a firm spanking.

Upon baring her for chastisement, Westerfield is swept away by desire, and before he can stop himself he has taken her innocence and completed the ruin of her reputation. He offers to release her from the betrothal contract, but her brother insists instead on a hasty marriage. As they attempt to recover from the scandal that becomes known as “the Westerfield Affair,” their marriage is clouded by his shame and her insecurities. Will they be trapped forever in a loveless marriage, or will they have the courage to move past their rough beginning to kindle the passion they both crave?

He began another volley of hard slaps, not with the intent to beat her into submission, but rather to distract himself from the temptation her bottom provided. But he didn’t truly wish to hurt her. He stopped to rub again, intoxicated by the feel of her warm cheeks under his hand.

She shifted her hips and turned her head in his direction. “I just require a little time to adjust, my lord. I’m angry with Maury and I’m angry with you, but I will do as I must.”

This was the Kitty with whom he’d fallen in love. Clever and self-possessed, even in her humbling position. He admired her honesty. He rubbed circles around her bottom.

“I assure you when I’m not furious I can be quite charming,” she added.

He chuckled. “I am well aware of that.”

“Please spank me, my lord, and get it over with, else Maury will send Miss Anderson to look in on us and I should die of embarrassment.”

Harry had considered her punishment to be mostly over, but to hear that she expected more created a tiny thrill of excitement. He followed the waistband of her drawers to her stomach and found the string, giving it a tug to loosen them.

“My lord!” she cried in a strangled breath.

He shimmied the drawers over her hips and sucked in his breath at the sight. She was absolute perfection—two shapely cheeks standing out as an amiable target for his hand, her skin showing a delicate pink where he’d already spanked. He brought his hand down on her bare flesh, shocking himself with the sound of it. He slapped again and again, finding it deeply satisfying—far more than he might have imagined. He slapped lower, growing slightly dizzy at the sight of her little sex peeking from between her legs. She kicked her legs and tried to reach back and cover her bottom with her hand.

“No, Miss Stanley,” he said, his voice far quieter than the sound of his slaps. “You have a spanking coming and I expect you to submit to it.” He bent her arm behind her back and held it there as he continued to spank every inch of her wiggling bottom.

Her squirms aroused him and he began to feel a heady thrill, realizing this beautiful creature would soon be his wife. His to take to his bed, and his to chastise when naughty. And, wickedly, he found himself hoping she would be often be naughty.

He spanked, falling into a rhythm of slapping one cheek then the other, watching the bounce of her resilient flesh under his hand.

“Ow, oh, please, Lord Westerfield!” she gasped. “I will not sass you again,” she promised.