Don't Miss
Home / Blog / The Winter Storm: An Ever After Chronicle by Renee Rose, Casey McKay, and Katherine Deane

The Winter Storm: An Ever After Chronicle by Renee Rose, Casey McKay, and Katherine Deane 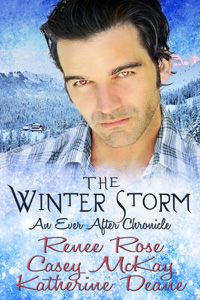 In a world where fairy tales and real life collide, in which truth is sometimes stranger than fiction and romance and fetish are the norm, a winter storm forces a cast of characters to converge at a unique lodge, and three interwoven tales are set in motion.

Jillian and her brother narrowly escape a wolf attack, thanks to a shapeshifter, Bertram. As the owner of the lodge, Bertram opens Jillian’s eyes to a whole new world filled with spanking and so much more. Will she keep fighting her submission, or allow herself the chance for true love?

Coral is a fugitive—hiding from herself, her true desires, and the sea witch to whom she owes a great debt. She fears showing real emotion and letting herself be free, but Jake Hill’s dominating presence beckons her to yield to him—not just her body, but her heart, mind, and soul. When the sea witch demands retribution, though, she may lose the one man she has come to trust.

When Faye blunders while casting a spell upon her landlord, he claims her as his slave until she can undo the magic, and she finds herself subject to his firm discipline. As her attraction to him grows, Faye fears she will give in to the handsome shifter and forever lose her maidenhood, and consequently her powers and the ability to fix her mistake.

Even as all three women struggle with surrendering to the dominant men they have fallen for, each finds herself on a journey to discover her true self. Can they find a way to yield to love without losing themselves in the process?

“Listen, you little ungrateful brat,” he turned and glared at her, “I am trying to help you. You will not be able to make it to the town before the storm hits. Besides that fact, this is my horse. You don’t take things that don’t belong to you.”

“Too bad! Now stop your fussing and put my brother on the horse.” She glared up at him defiantly.

“Little girl, you better put that damn sword down before you find yourself upended over my knee.”

He sensed her movement before she swiped the sword across his arm, and he saw two drops of blood form through the cut in his shirt. He knelt and placed the injured man on top of his coat, then set the pack on the ground.

“You’re going to regret that,” he growled and watched her eyes widen in fear as he snatched the sword away from her easily and pulled her to him.

“Don’t hurt me!” she shrieked.

He sat down on the pack and yanked her over his lap. “Oh, there won’t be any permanent damage, but this is going to hurt. You’re going to get a damn good spanking. That’s how we deal with little girls who act too big for their britches where I come from,” he growled. Before she had a chance to reply, he lit into her backside.

“Ow, ouch! Stop!” She flailed her arms and legs.

He gave her another hard swat. “Stop the drama. You can barely feel my hand through all these layers.” He pulled up her dress and her petticoat and inspected her panty covered bottom, barely pink from his quick warm up. He would change that quickly.

“You can’t do this! I might get hypothermia!” she squealed and placed her hands across her bottom.

He chuckled and held her hands to her back, “Well then, we’ll just have to get you warmed up, won’t we?” He brought his hand down on the back of her panties again and again as she hollered and cursed.

He placed his hand against her warm bottom. “What. Did. You. Say. About. My. Mother?”

She tried to scramble away from him. “I’m sorry. I lost my temper. I didn’t mean… ooof!”

He tipped her over farther, yanked her panties down, and brought his palm crashing onto her bare bottom.