The Wolf’s Demand by Maggie Ryan and Shanna Handel 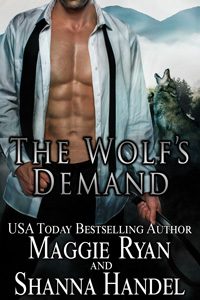 When twenty-four-year-old Cassandra Ambrosia foolishly puts her husband’s love for her to the test, the last thing she expects is for him to strip her bare, spank her until she is sore and sobbing, and then master her beautiful body more shamefully than she would have thought possible.

Deo Ambrosia has been gentle. He has kept the fearsome, primal beast inside him hidden. But Cassandra’s rash words have unwittingly triggered an ancient curse which has plagued his family for generations, and if he is to protect his wife he must teach her what it means to be the mate of an alpha wolf. She will be made to submit, to obey, and to surrender herself to him completely.

As Deo dominates Cassandra ever more thoroughly, taking her hard and often and punishing her whenever she disobeys, her passion is rekindled and soon burns hotter than ever. But with a terrible evil closing in, Deo and Cassandra will need more than just their own strength and courage. Their entire pack will have to stand and fight together if they are to prevail.

Publisher’s Note: The Wolf’s Demand is the first book in the Shifters’ Call series. It includes spankings and sexual scenes. If such material offends you, please don’t buy this book. Also note that an earlier version of this book was previously published under the title Princess of the Pack.

“What do I require to keep you safe?”

“Obedience, sir.” The belt whipped me again. I found myself whimpering as the flare of heat was instantaneous in both my ass and my face. If Draco hadn’t heard the previous spanking, he was hearing the belt meet my behind. I was sure of it.

“Good girl. How many do you have left?”

“Count them for me.”

One by one, the belt came down onto my ass, covering every inch of my tender skin. He paused between each one to hear my voice quiver out the number we were on. Tears fell from my eyes and my hips started to squirm into the bed. I felt as if I’d sat on the glowing embers of a fire. When I finally called out the number eight, Deo tossed the belt onto the bed, but when I began to lift, he pressed his hand against my back.

“We are not yet done. Did you forget there is more than just having your ass reddened?” His hand slid across my throbbing posterior to dip between my legs, instantly bringing heat to my face.

Memories of what had transpired after my first spanking flooded through me. “No, sir,” I managed, failing to hide my moan when his fingers swept along the seam of my sex.

“Tell me, what is required before your transgression is fully forgiven?” Deo asked, a thick finger pushing into my sheath, the moisture that had pooled with every stroke of his belt making the entry easy.

“Penance.” It was a word of atonement. A word that should have had me feeling remorseful. Reparation… a price required and yet, as his fingers danced along my sex, all I wished was that he’d push the one inside me deeper, fill me fuller, pump into my body with demanding force. Whereas just moments ago my hips had pressed into the mattress to attempt to avoid the sting of leather, now I pushed back, silently begging him to take me. “I’m ready, sir.”

My husband’s chuckle told me that he was acutely aware of exactly what his action was evoking. “I’m glad to hear that,” he said, bending over me, causing my skin to pebble with goosebumps with the puffs of air wafting over my neck, my ear. I shuddered as he licked the skin his breath had warmed and then stiffened when his free hand drew my right buttock away from its twin and the finger that was pleasuring me slipped from my pussy to circle a place I’d never given a single thought to as being seen, much less touched.

“Wh-what are you doing?” I asked, my attempt to shift my hips thwarted when his arm pressed against my tender ass.

“Preparing you to accept the penance you are so ready to make,” he said, parroting my own words that I was suddenly wishing I’d not said so quickly.

“You’ll discover that atonement takes many forms. Stop clenching. It will be easier for you if you relax while I prepare you.”

2018-03-30
Chris
Previous: Trained by the Trillionaire by Emily Tilton
Next: Claimed for Their Use by Ivy Barrett