The Wolf’s Mate by Vonna Harper 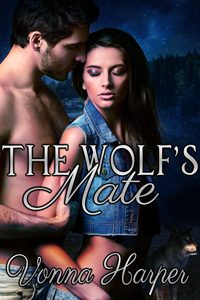 A year ago, the man Aileen loved lost his footing and tumbled into a raging river deep in the wilderness of the Pacific Northwest, and now at last she has returned to the spot to say a proper goodbye. Instead of finding closure, however, she encounters something altogether different: a wolf who transforms before her eyes into the man she had thought lost forever.

Since he plunged to his death only to be brought back to life in a new form by some power beyond his understanding, Slade has grown used to his wolf’s body, but then a familiar scent changes everything. When he comes upon the woman he loved, he suddenly finds himself with the body of a man once again, but his primal lusts remain as strong as ever and he is driven by instinct to reclaim her as his mate.

Slade’s unexplainable appearance shocks Aileen, but he gives her little time to ponder the situation. Instead he strips her, spanks her, and sets about teaching her to completely surrender her beautiful body to him. Slade’s bold, untamed dominance quickly sets Aileen’s desire ablaze, but can he stay in human form long enough to truly make her his?

Publisher’s Note: The Wolf’s Mate includes spankings and sexual scenes. If such material offends you, please don’t buy this book.

“This is how it must be.” He reinforced his comment with a sharp slap to her bare butt. “With me in control.”

She was still trying to look behind her when he spanked her again. This blow was stronger with more of his power reaching her. He’d positioned her over the trunk so she was forced onto her toes. Her fingers kept slipping off the bark. She had no doubt what she looked like, a woman with her top riding up near her armpits and her jeans tight around the tops of her thighs. Her buttocks were exposed and available to him, perhaps encouraging him to continue spanking her.

Was that it? If her ass wasn’t so accessible, he would have stopped with one or two blows? Instead, he repeatedly smacked her ass.

“What are you doing? This is crazy.”

“Not yet.” He pushed down on the back of her head until her chin rested on wood. When he had her in the position he wanted, he went back to his primitive brand of discipline.

This way she couldn’t resist, and now her sounds were muffled. She didn’t want to whimper but only that came out. There was a measured quality to what he was doing, almost as if he was listening to an inner rhythm. He’d continue until the song was over. There was nothing she could do except endure.

Pleasure with the pain?

Her ass throbbed as the blows built. She felt reduced, primal, helpless. Alive.

2017-01-29
+admin
Previous: Donovan’s Rules by Sassa Daniels
Next: Wedded to the Warriors by Sara Fields