The Writer and the Rancher by Chula Stone 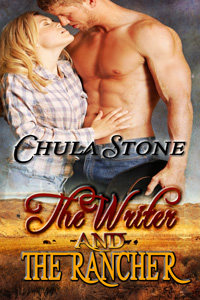 After a summer-long writers’ retreat turns out to be an internet scam, Amber Wheatleigh finds herself standing beside her broken-down car on a dirt road in the Colorado foothills. When a local rancher by the name of Travis Bradley offers her a place to stay for the night, she hesitantly accepts, and before she knows it she has agreed to spend the summer cooking and cleaning for Travis and his ranch hands.

Something about Travis intrigues Amber, and her interest in him is multiplied many times over upon her discovery of a diary kept by his late wife Heather before her tragic death. The diary speaks of a beautiful, deep, and lasting love, but also of a man willing to take his young wife in hand… and put her over his knee for a sound spanking.

This dominant side of Travis captivates and excites Amber and she spends as much time with him as she can manage, but when he learns of her discovery of Heather’s diary his anger at Amber’s uninvited intrusion into his past threatens to end their budding romance. Desperate to win his forgiveness, Amber makes a bold request—that Travis punish her as he would have punished Heather—and he reluctantly accepts.

Even as the sting of his switch still burns on her bottom, Travis knows in his heart that Amber can bring true joy into his life in a way that nothing has since Heather’s death. But can he let go of the past and take hold of a future with her, and can this feisty writer learn to love—and obey—her firm-handed rancher?

Publisher’s Note: The Writer and the Rancher contains spankings of an adult woman, including domestic discipline in a contemporary setting. If such material offends you, please don’t buy this book.

At last, Travis put a hand on her shoulder and turned her to him. Taking the switch from her, he gave her instructions. “I want you to lean over and put your hands on your knees.” When she had complied, he slid the switch in between her thighs and told her, “Keep that there. It won’t be for long. I’m just going to take a minute to warm you up with my hand. I don’t want you so freaked out by the pain that you can’t remember why I’m giving you this switching.”

He was as good as his word. He started out slowly, deliberately, with well-placed, well-controlled swats. He covered her bottom cheeks thoroughly, then started over again, spanking for several seconds before pausing and swiping at his handiwork. She realized he was not rubbing away any of the sting, but rather making sure every bit of her skin got attention. In these pauses, she also realized the full extent of the embarrassment of having to stand there and let him do whatever he wanted, with no say in anything.

As if reading her mind, he addressed her. “Embarrassing, huh? That’s part of it, too. It’s all part of being spanked. What do you think so far?” His tone let her know that she had no choice but to answer and that her answer had better please him or she would regret it.

She thought for a moment before saying, “I don’t know what to think except that it hurts.”

“Yeah. A lot more than I thought it would.”

“And this is just my hand. Think about what that switch is going to feel like.” He slid the switch out from between her thighs. “Better go over there and hold onto that branch.” He pointed to a limb hanging over the boulder and out toward the surface of the lake.

She walked awkwardly, with her jeans around her knees, shuffling toward the tree. He steadied her by her elbow then placed her hands where he wanted them on the low hanging branch. “No, not so close to the trunk. Farther out, where you’ll have to bend over more. That’s right.”

She felt absurdly ridiculous, standing there in her thong, bottom cheeks on display and stuck out like the barrier at a railroad crossing.

Travis rubbed the switch all over her backside. “Hold on tight. Don’t move your hands.” He tapped the switch on her backside several times, quickly, lightly, making her wonder if that would be the extent of her ordeal. It was bad enough, standing there letting him direct her every move.

Perhaps that was the whole point and he wouldn’t really—Youch! “Owww!”

He rubbed the switch up and down, then started with the tapping again. “Good girl. You took your first one well.”

2013-11-27
+admin
Previous: The Man Of Her House by Constance Masters
Next: Marshal’s Law by Maddie Taylor