Their Defiant Human by Ivy Barrett 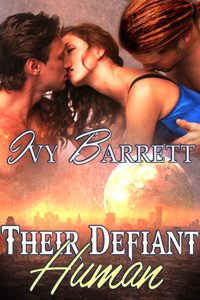 After she refuses to share her unique gene repair research with the leaders of a war-ravaged planet, beautiful human scientist Andrea Raynier is suddenly taken captive by a bold, handsome alien warrior named Mal Ton. Fearing that her techniques could be used by the aliens to design biological weapons of terrifying power, Andrea vows never to cooperate with Mal Ton, but she quickly discovers that he is more than ready to do whatever is needed to compel her obedience.

Andrea soon finds herself naked, bound, and quivering with need as she is sternly punished and thoroughly claimed by Mal Ton and his colleague, Doctor Roark Talbot. But will mastering Andrea’s body be enough for their purposes, or will her captors need to conquer their defiant human’s heart as well?

Publisher’s Note: Their Defiant Human is the first book of the Captives of Stilox series. It includes spankings and sexual scenes. If such material offends you, please don’t buy this book. Also note that an earlier version of this book was previously released by another publisher with the title Seducer.

Four more spanks fell in rapid succession, alternating sides. She shook in her restraints, horrified at her body’s unwanted reaction. The need that had smoldered all day, flared to life with a vengeance. Her pussy ached, wet and ready to be filled, to be fucked.

“Stop! Please, stop,” she sobbed, more afraid she’d come if he didn’t cease than of more pain. “I’m sorry I disobeyed, and I’m sorry I thought about deceiving you.”

His swats slowed, then finally stopped, leaving her ass hot and throbbing. “That’s sufficient for now, but our activities have just begun.” He handed the paddle to Roark, who returned it to the cabinet. Then Mal Ton walked to the head of the apparatus. “This puts your luscious mouth at the perfect level for fucking.” Mal Ton grabbed the back of her hair and pulled her face up until she looked into his eyes. “It also angles your hips just right for the introduction of anal play. I don’t really need to ask if you’ve ever had a cock up your ass, do I?”

“Is that what you intend?” Dread made the question sound strangled. “Do I have any other choice?”

“You had other choices.” He glanced at Roark then returned his full attention to her. “You chose defiance, which means your virgin ass is mine.”

His harsh expression and imperious tone sent a fresh wave of fear crashing over her. The two men silently glared at each other while Andrea waited for Mal Ton’s next move. She wasn’t sure if they were communicating telepathically or using silent signals, but they started touching her at exactly the same time. Roark trailed his fingers up her spine as he stepped in front of her. Mal Ton moved behind her and squeezed her stinging ass. While Roark’s fingers teased with feather-light touches, Mal Ton’s touch was firm and possessive.

“I don’t want that,” she cried, growing more agitated as Mal Ton focused on his target. “Anything but that.”

Roark reached beneath her and cupped her breasts as Mal Ton rotated the contraption farther forward. She gasped and stiffened, but the straps held her snugly in place. The top of her head nestled against Roark’s crotch. Mal Ton was right; all she had to do was raise her face and he could slip right into her mouth.

“You’re already wet.” Mal Ton traced her slit, the easy slide of his fingertips proving his point. “Did the paddling get you this hot or was it the thought of taking me up the ass?”

2016-10-30
+admin
Previous: Their Wayward Wives by Emily Tilton
Next: Libby Learns Her Lesson by Dinah McLeod