Their Firm Men by Emily Tilton 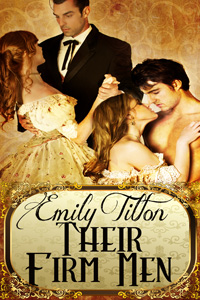 When she hears about the engagement of her sister, Esther, to one of San Francisco’s wealthiest merchants, twenty-five-year-old Amelia Lander decides it is high time she obeyed her mother’s last wish—that she watch over her younger sister. Amelia leaves her teaching job in New York City and travels by train to San Francisco, where she loses no time in calling on Esther and her new husband, Samuel Allen, and providing them with proof that she is Esther’s sister and that her existence has been intentionally concealed by their father for seventeen years, since Esther was a toddler.

Samuel suggests that Amelia live with them, but when Esther says something impolite and Samuel tells her—in front of Amelia—that she can expect to be soundly spanked for her rudeness, Amelia is shocked. Samuel informs Amelia that he will run his house as he sees fit, and when she responds with insults and defiance, Amelia soon finds herself over the knee of Samuel’s business partner, Michael Sullivan, for a long, hard spanking on her bare bottom. In spite of her shame and fury, however, Amelia cannot help but be drawn to the man who chastised her so thoroughly.

When she learns that her father is once again up to no good, Amelia runs straight to Michael with the news, and he and Samuel form a plan to stop him. But can Amelia bring herself to obey Michael and stay out of the way, or will her foolhardy actions cost the life of the man she has reluctantly come to love?

Amelia felt herself begin to cry. “And you truly mean to spank me?”

“I am afraid I do, Miss Lander. Lay yourself over the end of your bed, now.”

She watched him pick up her pin box from her dresser.

“I am going to pin your skirts up above your waist,” he said by way of explanation.

“What?” Amelia felt her whole body begin to tremble.

“Captain Allen is of the opinion that women must be spanked upon their bare backsides.”

“Now you must surely be in jest,” Amelia said desperately.

“I assure you I am not, Miss Lander,” Mr. Sullivan said. “Now, please do as I have said, or I shall have to enforce your obedience.”

In the face of the imminent enforcement of his will physically upon her, Amelia felt again that traitorous inkling of an emotion so unfamiliar to her—that she submit, that it was right that she should submit. More in response to that treason from her own mind than in true defiance of Mr. Sullivan, or even in fear for her bottom, she bolted suddenly for the door, and what was sure to be a vain attempt to get past Mr. Sullivan and out into the hallway, where she would have at last run down the stairs and out of the house and away. But she got only two steps, of course, before Mr. Sullivan had her around the waist and was lifting her up into the air and carrying her over to her bed.

“I am sorry, Miss Lander,” he said, “but I must do as Captain Allen has asked, and I must also say that you are getting no more than you have deserved. I can tell that you are a fine young lady, and I have an admiration for you, though I have known you only a few hours, but I am in complete agreement with Captain Allen about what it is necessary to do with fine young ladies who disgrace themselves by insulting gentlemen.”

But Mr. Sullivan laid her down over the end of the bed and held her torso down upon the mattress and its covering of chenille. With his right hand he took hold of the hem of her frock and then of her petticoat and lifted them up roughly, as he had to because he was holding her down at the same time with his left. She was struggling as hard as she could, but it was of course to no avail. Michael Sullivan was a big, powerful man, and although he was not hurting her, it was clear that he was absolutely determined that she would have her spanking.

Amelia sobbed and flung her arms out instinctively, trying to catch hold of him. But he had gathered her frock and her petticoat now into his left hand, and with his right hand he was opening her drawers.

2014-03-04
+admin
Previous: Taming Megan by Natasha Knight
Next: The Winter Storm: An Ever After Chronicle by Renee Rose, Casey McKay, and Katherine Deane