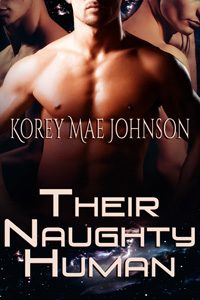 After she inadvertently discovers that the government has been maintaining contact with an alien race, twenty-four-year-old Chloe Jergens ends up being carried off by three huge, handsome aliens who intend to take her as their mate.

Though the aliens quickly prove more gentlemanly than she might have expected, they make it very clear that disobedience will earn her a thorough, humiliating spanking. But when Chloe decides to explore a dangerous planet on her own in an act of petulant defiance, will being punished and then claimed by all three of her mates at once be enough to teach her to submit?

Publisher’s Note: Their Naughty Human includes spankings and sexual scenes. If such material offends you, please don’t buy this book. Also note that this book was previously published under the title Claiming Chloe as part of a multi-author collection entitled Bound, Spanked and Loved: Fourteen Kinky Valentine’s Day Stories.

Now that her pajama bottoms were out of the way, her cries took on a whole new tone, as did her struggle. Holding her tight, he continued his volley of spanks until he felt teeth on his calf.

Shit! Gritting his teeth, he stood up, lifting her off of his lap to inspect his leg. There was, indeed, a spot of blood where she had sunk in her teeth. He looked down at Chloe to be met with two shimmery, rebellious blue eyes glaring ruefully back at him.

She didn’t have long to glare. Dax and Tick both stood up at the same time, but Dax got to her first, grabbed her arm, and hauled her back up into standing, then put one of his boots on the sofa and pulled her whole body over his leg, her pants now dangling around her ankles. He grabbed her panties and tugged them down as Chloe finally changed her strategy.

“Dax, no! I’m sorry, okay? Malo—I’m sorry! It hurt! I didn’t know what to do!” she began apologizing well before Dax actually started slapping his large palm across her squirming backside. The way she was dangling over his knee kept her from having anything to grab, scratch, or bite, and was surely more uncomfortable for her as well.

He saw Tick adjusting himself in his pants as he watched, a more and more satisfied expression crossing his face every moment. Tick was surely enjoying this as much as Malo, and Malo would put money on the fact that he was hard for all the same reasons, especially now that Chloe’s beautiful, bare pussy was on display along with her rapidly reddening bottom. It was more than enough to get Malo’s attention off of the pain in his leg.

“Please!” she was yelping now as her helplessness apparently began to really sink in. “I’ll do anything! Just stop!”

“We expect you to behave. And when you earn yourself a spanking, you need to accept it gracefully!” Dax immediately demanded with fervor, giving harder slaps to drive home his scolding.

“Good!” He dropped his leg down and as soon as her feet made contact with the floor, she grabbed her bottom protectively with both hands and turned her whole body away, eyeing them one by one with a look of betrayal. Dax quickly continued, “Then bend over the back of the sofa, girl! And I mean now.”

2017-04-17
Chris
Previous: Sharing the Princess by Katie Douglas
Next: His Caged Kitty by Alta Hensley