Their Wayward Wives by Emily Tilton 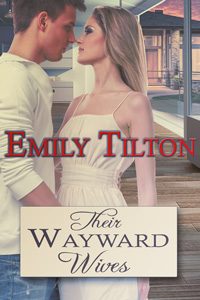 When Marine Corps veteran John Lind and his twenty-two-year-old bride Cathy overhear their next-door neighbor Doug spanking his wife, Mindy, it quickly leads to conflict in their own relationship. Realizing that he has let Cathy get away with her snippy attitude and frequent defiance for far too long, John decides that it is well past time to bare her bottom, spank her soundly, and remind her who is in charge in their marriage.

Though it comes as a shock at first, Cathy soon discovers that being completely taken in hand by her husband arouses her intensely. With John now demanding her obedience both in and out of the bedroom, she frequently finds herself blushing crimson yet still burning with desire as she is thoroughly and shamefully mastered. But when John and Doug leave town for two weeks on business, can Cathy and Mindy behave themselves while their firm-handed husbands are away?

Publisher’s Note: Their Wayward Wives includes spankings and sexual scenes. If such material offends you, please don’t buy this book.

“Cathy,” John said patiently, but with the edge of authority that she hadn’t heard directed at her until yesterday at the Landises, “we need to start your discipline the right way. I can’t let you have any foolish notions about how it’s going to work. Things between us are going to change. That begins now, with you naked for your punishment.”

He moved toward her, and she cowered back, but then she found his strong arms around her, holding her close, and all the tension and resistance seemed to go out of her body as her face came up against the cotton of his t-shirt and her tears began to dampen it. “Sir,” she murmured again. “Sir. Sir.”

“Sweetheart, I love you so much,” John said.

“I don’t want to be naked,” Cathy wailed softly. “Please don’t make me be naked, sir.”

John stroked her hair for a few moments, and then he said, in a much more gentle tone than the words seemed to deserve, “Would you have taken off your clothes for the guy in the bar, sweetheart? The one who you let put his hand on your ass?”

“Answer me, Cath.” His voice rumbled in his chest, seeming to make Cathy’s whole body vibrate.

“Yes, sir,” she said, trying somehow to speak so softly that he wouldn’t hear her.

“Would you have touched their cocks?”

“Why can they see your pretty pussy, but I’m not allowed to? Why can they have you touch them that way, but you won’t touch your husband’s cock?”

Cathy wanted to say, “But they didn’t.” She knew, though, in her heart, that they would have. If John hadn’t come to get her, they would have. So she told the truth, even though she didn’t understand what it meant. “Because I love you, sir.”

John fell silent again, still holding her so fiercely that Cathy started to feel like her husband was the only thing keeping her from flying apart at the seams. When he spoke again, though, the stern edge had come back with much greater force than it had ever yet possessed.