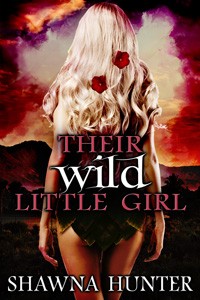 After stumbling upon twenty-eight-year-old Elizabeth Morton in the South American jungle, Marcus McRoberts learns that she has been surviving in the wild since her family perished in a plane crash two decades ago. Assuming he is an enemy, Elizabeth attacks him, and when reasoning with her fails Marcus follows a sudden instinct, overpowers her, and spanks her bare bottom thoroughly. To his surprise, after her chastisement she rushes into his arms, seeking the gentle comfort he promptly provides.

Marcus brings Elizabeth home, and aided by his friend Jessica, a fellow PhD student who was a childhood friend of Elizabeth, he sets out to prepare her for life outside the jungle. In light of her response to her first spanking, Marcus and Jessica take it upon themselves to provide Elizabeth with the firm discipline and loving attention that she desperately needs, and soon she has begun to blossom as their submissive little girl.

With each passing day their feelings for Elizabeth grow deeper, and before long Marcus and Jessica are showing her all the pleasures that submission to their dominance can bring. But both lust and conflict quickly build between Marcus and Jessica and threaten to tear them apart. Can they find a way to keep their unique household together even as they strive to tame their wild little girl?

Marcus held up the things he had removed from the chest. “These are some of the things I will use to reward or punish you.”

He showed her the nipple clamps, paddle, and lube he had taken from the chest. She looked at them without fear but with a certain excitement that displayed more understanding than he would have expected.

“Some will hurt, some will feel good, and some will do both,” he continued as he squatted down before her.

“Put your hands behind your head,” he said softly and she complied.

He attached the nipple clamps a little too hastily. He was letting his excitement get to him. “Ouch!!” she cried, moving her hands from her head.

“Don’t touch,” he ordered. “They’ll stay on until I say they can come off, understand?”

“Yes… sir,” she said in a resigned voice.

“Good girl,” he said, standing back up, “now lean forward and put your bottom in the air,” he instructed and again she complied, the chain on the nipple clamps brushing against the floor as they swung back and forth.

“I’m going to spank you again,” he explained, “just like by the stream. I’m going to slap your bottom, but this time with a paddle.”

Elizabeth’s hips squirmed and he gave her a few warm-up smacks.

“Do you understand why I’m doing this?”

“Because I was whining?”

“Are you asking me or telling me?”

“I am being spanked because I was whining.”

Marcus began spanking her in earnest.