Don't Miss
Home / Blog / Theirs to Correct by Ivy Barrett

Theirs to Correct by Ivy Barrett 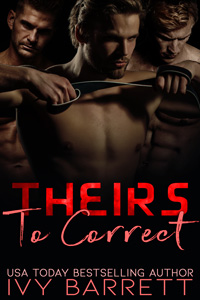 Emily Delacroix ran when she was chosen for breeding. The Kobar captured her anyway.

Now as she is made to lick her arousal off the fingers of the brute who just spanked her, the only thing more humiliating than her body’s shameful betrayal is knowing full well what comes next.

These three fearsome warriors aren’t just going to claim and ravage her in every way possible.

They’re going to breed her.

Publisher’s Note: Theirs to Correct is a stand-alone novel which is the third book in the Kobar Mates series. It includes spankings and rough, intense sexual scenes. If such material offends you, please don’t buy this book.

“That’s twice you came without permission.” Nayez lifted her off his cock. He turned her and pushed her down across his lap. His hand fell fast and hard against her ass cheeks. The trainer was still in her bottom, but Nayez’s sudden movement had jerked it out of Lahval’s hand.

“Stop,” she cried, clutching the bedding. “I’m going to come again if you don’t stop!”

“Fight it off.” Nayez pulled the trainer out then shoved her legs apart. He stroked her wet folds then slapped them. She shrieked and tried to crawl off his lap. Nayez held her down and swatted her sensitive flesh several more times. “Your pleasure belongs to us. You come when we tell you to or not at all.”

She was so wet that the insides of her thighs were slick with it. Nayez thrust his fingers into her cunt and fucked her punitively. She didn’t struggle. Instead she moved her legs even farther apart and lifted her hips. Lahval inhaled her evocative scent and watched Nayez’s long fingers fill her hole with brutal possession. He needed to be part of this, to spank, fuck, and claim her, make sure the entire universe knew where she belonged.

“I’m sorry,” she sobbed as Nayez went back to spanking her bottom.

Lahval’s cock hardened and his balls ached as Nayez’s hand slapped against her reddened cheeks.

“You belong to us now,” Nayez snarled as he delivered two resounding slaps to each side. “Who owns your pussy?”

“And who owns your tight virgin ass?” Nayez emphasized the question with a flurry of hard spanks.

Hearing his name in that submissive tone sent feral hunger thrummed through his body. He wanted her laid out beneath him, helpless to resist as he pounded into her cunt, or better yet her ass. His eyes hazed over and a buzz like a swarm of insects filled his ears.

Nayez growled, sounding as savage as Lahval felt. Then Nayez picked her up and placed her astride his legs. “Put me in,” he ordered.

After pressing her against his chest, Nayez reached down and parted her ass cheeks. “Join me, brother. We all need this.”

She gasped, then stilled, obviously waiting to see if Lahval would accept the invitation.

Grasping his cock, Lahval moved in close then hesitated. He wanted this with every fiber of his being, but she was afraid not aroused.

“Please,” she whispered, starting to shake. But was she begging him to continue or to stop?

Forcing himself to concentrate through his rioting hormones, he scanned her mind. She was afraid, but she was more aroused than she had ever been before. She wanted this, needed it just as badly as they did, which was part of what frightened her so much. She didn’t understand her body’s reaction to the pain and their domination, but she wanted to explore.

Silencing the last of his inhibitions, Lahval positioned himself against her virgin hole and slowly pushed through the tight ring of muscle. She cried out then moaned, her inner muscles fluttering. Lahval panted harshly. She was still slick inside and out from the trainer, but the pressure was almost painful. After a brief pause, he advanced. She whimpered as he slid deeper, and then deeper still.

Nayez released her bottom cheeks and buried his hands in her hair. He pulled her mouth to his and kissed her passionately. Glad for the distraction, Lahval gave her a bit more. He progressed by increments until she had taken his entire length. He paused, savoring the firm grip of her body and giving her a moment to adjust to the stretch of having two Kobar cocks deep inside her.