Don't Miss
Home / Blog / Theirs to Share by Jaye Peaches 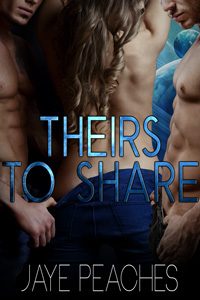 The Hezara have kept Earth safe for generations, but their protection comes at a price, and when Shayla Tesser is gifted to a pair of battle-hardened warriors she knows what to expect. She will be trained to serve them, and her virgin body will be used and enjoyed in every way imaginable.

She will learn to be obedient, surrendering completely to even their most shameful demands, or she will be punished. But the pain of being spanked until she is sore and sobbing is nothing compared to the intense, desperate pleasure she will endure when the Hunger comes upon her mates and one savage, screaming climax after another is wrung from her sore, thoroughly spent body as she is taken roughly by them both, over and over again, until their lust is finally sated.

With each passing day Shayla finds herself delighting more and more in pleasing her masters, but she is no meek, helpless concubine. There are secrets being kept from the people of Earth, and she plans to uncover them, no matter the risk. But when she learns something that could upend Hezara society completely, will she end up losing everything she has grown to love?

Publisher’s Note: Theirs to Share includes spankings and sexual scenes. If such material offends you, please don’t buy this book.

He picked up pace while delivering lighter smacks. Small blotches of purple deepened alongside pink—she was turning colorful, like a painting.

She squealed rather than cried. There was something exciting about the way she squirmed and twisted, clawed at the floor with her nails and tried to kick her legs. She wasn’t resisting, she was responding. A droid would lie there and scream, because they were programmed to scream. What Kriss and Jago were witnessing was spontaneous and real.

Shayla sobbed. Kriss had lost count—probably thirty or so? He glanced at Jago, who was focused on something else. From his lower position, he had a good view of her sex.

“She’s puffed up and glistening like dew,” Jago whispered. “Keep spanking, not too hard now, just enough to keep her hot.”

He wasn’t referring to the soaring temperature of her ass. Kriss smiled. “Sure.”

Adjusting the height of his arm, he patted her rump lightly, but so fast, she was left breathless. She hung her head and whimpered.

Kriss glanced at Jago, who was sliding his hand up her inner thigh. “She crying?” Kriss asked.

“Yes, sir,” she replied with a surprisingly controlled voice. “I’m sorry I touched myself.”

“So, you’re going to come now, okay?” Jago said. His fingertips reached between her legs.

“Carry on, Kriss, Nice and steady, like you’re fucking her.” Jago referred to the rhythm of the spanks.

Kriss got the message. He alternated between each cheek while Jago thrust his fingers in and out of her drenched fuck hole. She quivered all over, from head to toe. With his left hand, he twirled a lock of hair into his fist and carefully raised her so he could see her face.

“Tears,” he commented for Jago’s benefit, “but, her eyes are crystal clear. Keep going. She’s panting.”

“I want to come,” she murmured.

“I’m going to give you a few hard smacks as you do. This is a punishment, Shayla.”

“Sir,” she groaned, resigned to her fate with a flushed face and slightly parted lips.

Jago was working hard to bring her to completion. He had three fingers plunged into her pussy.

Kriss smacked her ass extra hard. She screamed and in the same moment, her body started to shake. Her leg muscles spasmed and her toes curled. He slapped her bottom again, meeting each visible contraction with a punishing spank.

“Oh, please,” she pleaded. For what? Mercy or more?

He let go of her hair and her head flopped forward.

2019-02-16
Chris
Previous: His Headstrong Bride by Sassa Daniels
Next: Bared: A Dark Romance by Alta Hensley