Don't Miss
Home / Blog / Theirs to Use: A Punishment Reverse Harem Romance by Emily Tilton

Theirs to Use: A Punishment Reverse Harem Romance by Emily Tilton 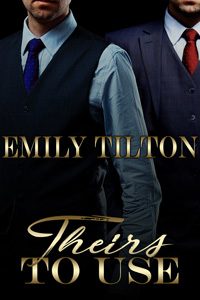 They bought her. They own her. Now they are going to get their money’s worth.

Eighteen-year-old Karen Hunter spent money she didn’t have and now she must pay the price. She has been sold to a group of ten wealthy men, and under her society’s strict laws on debt repayment, her beautiful, virgin body is theirs to use and enjoy in any way they desire.

Karen wasn’t cheap, but as far as her new owners are concerned, she was worth every penny. Her cheeks blush delightfully as she is stripped bare for an intimate, thorough examination and her bottom reddens wonderfully under the strap when she earns herself a punishment. But best of all is the way her body betrays her as she is taken over and over in the most shameful of ways, leaving no doubt that despite her protests she is getting exactly what she has always needed.

Publisher’s Note: Theirs to Use includes spankings, sexual scenes, intense and humiliating punishments, and strong D/s themes. If such material offends you, please don’t buy this book.

Another hand touched her punished bottom, rubbed gently, and Karen couldn’t stifle the whining moan that burst from her chest. She felt herself becoming wild, just as Mr. Green had said, felt herself trying again to escape the hands holding her down. To her horror, though, as Mr. LeBlanc moved his soft touch inward, to rub her pussy up and down, caress her burning clit, the struggle seemed to intensify the arousal she felt there, as if her whole body somehow shared in it now through the muscles the four men restrained.

“There we go,” said a cultured voice from directly behind her and above her: Mr. LeBlanc. “There we go. I know it’s hard to take a whipping, but you can be our good girl now, can’t you?”

She sobbed into the table as she felt her pussy gush its wetness into his hand.

“That’s it. So nice and wet for us, aren’t you? Mr. Green, I think you could lubricate the plug with her sweet cunny’s juices if you’d like.”

Cunny. She’d never heard a pussy called that before. It seemed worse even than cunt—more degrading somehow. She whimpered at the sound. Mr. LeBlanc stepped away.

“Thanks,” said Mr. Green, “but this is easier to control.” Karen heard a snap, and then a squirt. Her face went hot.

“No, please…” she whispered. The men, who had been carrying on quiet, murmuring conversations just a few moments before, had suddenly all fallen silent as if at the sight of whatever Mr. Green held in his hand, so her whisper came clearly to her own ears and, she felt sure, to theirs, against the soft background noise of ice clinking in drink glasses.

“We did warn you not to disobey, sweetheart,” said Mr. Singleton. “We even put you in your cage last night to help you understand. Now it’s time to learn your lesson.”

She wanted to cry that she had already learned her lesson with the strap, but a remnant of her defiance, her hardness, kept her from giving in that way.

“Mr. Jefferson,” said Mr. Green, “would you hold the bottom open for me?”

“Glad to,” said a deep voice that made Karen think that Mr. Jefferson must be the black man she had noted among her owners. More hands, rougher than Mr. LeBlanc’s. Karen cried out as he spread her whipped buttocks, held them far apart.

“This will be difficult for you at first,” Mr. Green said. “Try to remember how you relaxed for the doctor yesterday.”

Karen whimpered at the memory, and then a hard, rounded thing pushed at the tight ring of her anus. The sensation made her tighten, despite Mr. Jefferson’s hands holding her bottom open, and that brought searing pain from the whipping that made her cry out.

“You have to open, Karen,” Mr. Green said in a harsh voice that seemed to make her whole body quiver. “This plug is going in your anus one way or another.”

He pushed again, and with a sob Karen managed to move her muscles there in a terribly shameful way that let the plug in. But as Mr. Green pressed it inside her bottom it kept getting wider and wider, so that she shrieked and struggled.

“She’s got some lungs,” she heard Mr. Harris say in front of her, a chuckle in his voice.

The thing pressed harder, got wider, until Karen thought she would faint at the pain, but then suddenly it narrowed again, and her bottom closed over what must be the taper at the base of it. For a moment silence reigned in the living room except for Karen’s jerking sobs of discomfort to have her anus so terribly full.

Then Mr. Green said, “Put her on all fours on the table. We’ll fuck her now.”

2018-04-13
Chris
Previous: Chosen by the Senator by Jaye Peaches
Next: Conquered: A Dark Sci-Fi Reverse Harem Romance by Sara Fields