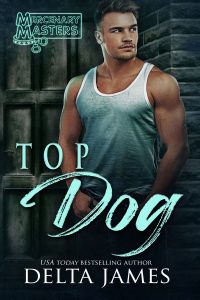 She was used to doing things her way. Then he took her over his knee.

When beautiful, headstrong medic Rhiannon Farrell disobeys her commanding officer and undertakes a dangerous mission on her own, she ends up over black ops soldier Sawyer Barnes’ knee for a painful spanking followed by an even more shameful demonstration of his dominance. But as humiliating as it is to be bared and punished like a naughty little girl, her body’s response to the infuriatingly sexy brute cannot be denied, and it isn’t long before she is calling him master.

As Sawyer introduces her to a world of stern authority and blushing surrender, every quivering climax makes it more clear that she belongs to him, but when Rhiannon is captured and held prisoner by a ruthless enemy will the ordeal change the nature of their relationship forever?

Publisher’s Note: Top Dog is a stand-alone novel which is part of the Mercenary Masters series. It includes spankings and sexual scenes. If such material offends you, please don’t buy this book.

“I really ought to spend more time teasing you, but the fact is, I really want to fuck you again. I might just die or my dick might explode if I don’t… and don’t do it fairly soon.”

All he could think about was thrusting up inside her, deep and hard. His mind had tried to tell him she was all kinds of dangerous and that Rhiannon was the kind of woman he could actually fall for. He’d been right about that as he had most definitely fallen for her. Sure, he wanted to fuck her, but it was so much more than that. He needed to take care of her, protect her. He wanted to send her back home to wait for him so they could start a life together. He needed her safe.

His fingers played in her labia, drawing them apart and allowing them to fold back together. He touched her clit only briefly so that she didn’t come. No, he wanted her to do that when he mounted her and plunged his dick to the very end of her cunt. He wanted her next climax to be more powerful than the first and to feel her pussy clamp down on him, until he dragged himself back only to thrust in with increased strength. He meant to ensure she was sore come morning.

The blood was pounding through his cock and his balls were rock hard. He held himself still but stared down at the place where his staff began to sink into her sheath. Slowly, inch by inch, he allowed himself to press into her, reveling in the soft heat that encompassed him. Nothing had ever felt this good. He’d meant to thrust in a little at a time, but Rhiannon’s hips surged upward as she came a second time. He allowed her to ride the wave of her orgasm before dragging himself back out and driving determinedly forward, this time pushing all the way to the root of his cock. Rhiannon sighed in complete bliss as he plunged all the way home—opening for him, accepting his dominance, accommodating his cock.

Sawyer slipped his hands underneath her, grasping her ass and holding her close and restricting her movement. He was balls deep inside her when she came again. He ground his pelvis against her clit and watched as her eyes darkened. She struggled with the restraints. He chuckled as he drew himself back, almost sliding entirely out before driving forward and then establishing a hard, strong rhythm that had her thrashing beneath him.

He pounded into her pussy, hammering her with a twist that caught her clit with every other thrust. Rhiannon began to breathe again in short, sharp pants as her body stiffened in anticipation before he pushed her over the edge one last time as he gave a ferocious thrust deep inside her. She cried out in ecstasy, her pussy spasming, clamping down all along his length as he began to empty himself into her. Her body trembled as he pumped himself into her, greedily drawing every last shudder from her body, savoring every last bit of pleasure he could.

2021-02-07
Chris
Previous: Hunted by the Barbarians by Epsilon Angel
Next: Nash: A Rough Romance by Piper Stone