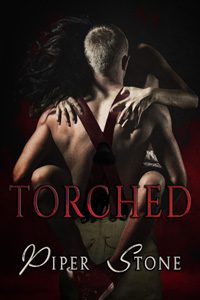 He makes his own rules. He’s going to make me follow them.

I work alongside firefighters, so I know how to handle musclebound roughnecks, but Blaise Tompkins is in a league of his own. The night we met, I threw a glass of wine in his face, then ended up shoved against the wall with my panties on the floor and my arousal dripping down my thighs, screaming out climax after shameful climax with my well-punished bottom still burning.

I’ve got a series of arsons to get to the bottom of, and finding out that the infuriatingly sexy brute who spanked me like a naughty little girl will be helping me with the investigation seemed like the last thing I needed, until somebody hurled a rock through my window in an effort to scare me away from the case. Now having a big, strong man around doesn’t seem like such a bad idea…

I felt the slight touch of the ginger when he placed the slender tip to my dark hole, his hand remaining on my back as he wiggled and twisted the piece. Ever so slowly the carefully carved root was placed in my ass, my breath stolen and my mind reeling. Even my ass muscles seemed to accept without question, clamping around the invasion and drawing it further inside. Yes, there was pain, but glorious pain, creating a boost of blood flow, a wild surge of power rushing through every muscle and tendon. I was alive. I was floating. I was free.

“Go back to the corner and I’ll be sitting here, watching you, waiting for the right time. Then we’ll begin.”

I hadn’t expected the words would cause such a reaction furrowing from deep within. I panted, my entire body quivering to the point he had to guide me back in position. Beads of sweat spotted along places that I’d never sweated before. I was a mess, a beautiful, glorious mess and I couldn’t even think about being made to wait until the effects of the ginger took hold.

The waiting was excruciating, especially knowing he was sitting in the chair opposite the desk. There was no drink in his hand, no cigar as I’d known from before. He was…

His full attention was on me, on his submissive, on the woman who’d vowed to surrender to his needs. Everything about this was cathartic and enlightening and I had no idea how I was going to obey his command without begging.

The ginger had no effect at first, merely a discomfort. At time ticked on, the secretions created a wave of heat, a slight tingling. I resisted clenching my ass muscles, but I knew that moment was coming.

Fifteen or twenty minutes passed and finally I heard the slight whoosh as the seat released his massive body and he rose from the chair. Flashes of lightning flickered from the window, even through the closed blinds, the sound of thunder getting even closer. Even the lights flickered more than once but I didn’t care. I was ready for anything he commanded, for any punishment he would dole out. I wanted to blurt out all my sins, those that I’d never be forgiven for, but he didn’t seem interested. He had his own needs and hungers, and he was ready for more. He would consume everything. “Clench your ass cheeks for me.”

I did as I was told, holding my breath, anticipating a stinging sensation. There it was. The sweet, blissful slice of a different kind of aching, leaving my mouth dry as a bone.

Blaise rubbed his hand across both ass cheeks and for some reason, I was embarrassed, feeling vulnerable. The intimacy was heightened. Either that or the increasing tingling sliding like spider webs out from the source. I could only imagine how a spanking would feel.

“I adore the way your face flushes, a beautiful rosy stain.” He brushed the backs of his fingers across my cheek, curling them as if seared from the heat of my skin’s blush.

I found myself quivering, longing to nuzzle against his hand. I wanted assurance that I would be safe. This startled me. I’d taken care of myself the majority of my life, refusing anything more than basic help and advice, especially from men. This man, this strong yet sensitive man wanted the job of protector.

And I would give it to him.

“Lean over the desk.” His tone washed over me, dark and rich.

“Yes, sir.” There was no hesitation. I wanted to obey him. As I leaned over, another rumble of thunder was quickly followed by a sizzling flash of lightning, the force creating a fervor of electricity skating across my skin. I grabbed the smooth, polished edge of the desk and for a few precious seconds, I was catapulted to another event, another man. This was completely different. This man was nothing like the asshole I’d learned to hate. I didn’t have to look to know he’d selected the cane. I could almost read his mind and I certainly had a better understanding of his dark desires.

He tapped the cane against both cheeks then rubbed the slender implement back and forth. “Such a naughty girl.”

The words were soothing, allowing me to close my eyes, relishing in the delicious anticipation. As he snapped his wrist, I sucked in my breath. The pain was biting, a strong flow of current sliding up along the insides of my legs. I didn’t cry out or even move, but he brushed his fingers along the same location, as if already concerned how I’d mark. I wanted to wear his stripes, a confirmation of our building relationship. The secretions from the ginger permeated into my skin. I was hot all over and so very wet, longing for my sexy firefighter. I blinked several times, realizing tears had formed.

2019-09-14
Chris
Previous: His for the Taking: A Dark Mafia Romance by Samantha Madisen
Next: Manhandled: A Dark Sci-Fi Romance by Sara Fields