Trained at the Castle by Emily Tilton 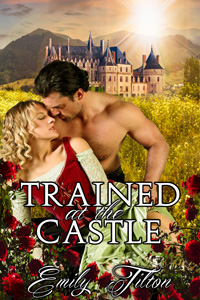 On an appointed day each year, the young women of Hala’s village who have recently come of age are stripped naked and put on display so that those maidens who cannot control their wanton lusts may be identified and dealt with firmly. Hala has dreaded this day since she turned eighteen a few months past, fearing that her body will betray her when she can least afford it.

When at last her time comes to be bared and displayed, her worst fears are realized, and after the shameful spectacle of her arousal is witnessed by all about her, Hala is bound and dragged off to the castle for punishment and training. Upon reaching her destination, she is soon left at the mercy of Sir Wake, the most handsome knight in the castle. To her shock, she finds herself yearning to obey the rough, dominant warrior’s every command, even when he chastises her thoroughly for her wicked desires.

Sir Wake cannot help but be smitten by Hala’s beauty and the way her training leaves her both blushing and throbbing with need for him. But when he helps his captive to escape the castle, will his actions bring ruin upon her village, or can the primal power which surges within her instead bring healing to the realm?

Sir Wake; his name was Sir Wake. The man who had just made the wetness flow between Hala’s legs, by showing Jas that if he wanted to see her breasts and the place where the castle-belt restrained her cunny, he would simply do so. In the wagon, Hala had sensed that the knights of Castle Jey might be like that—that they might be men who took what they wanted, especially where girls were concerned. Not ordinary men—just as Sage Fedan had said in her dream that no ordinary man could quench Hala’s fire. But they had laid no finger on Hala except when Sir Deved had first bound her to the bench, and afterward when they loosed her, and then re-bound her, at their few stops on the journey.

Now, though, she saw a knight in his castle, treating a castle-girl the way Hala had imagined, on her pallet with her hands tied to its sides, castle-girls might be treated. And instead of looking at Jas, Sir Wake looked at Hala for a long, long moment, before he turned back to the red-haired girl he had just exposed so that he might evaluate her naked beauty.

He stooped a bit, and Hala watched him bend closer to Jas’s cunny. “Where are you from, Jas?” he asked softly.

“How does it feel to wear a castle-belt?”

Hala gave a little gasp, as she saw Wake begin to stroke Jas right upon the leather restrainer, where her red-gold curls sprouted naughtily around the leather.

Hala’s gasp was nothing compared to the way Jas sighed. “S-strange, my lord,” she managed to squeak.

“Did you know how very wicked a girl you were, before Horseday?” Sir Wake asked quietly.

“N-not r-really, my lord. Oh, please!” Sir Wake had turned her around, roughly, and taken hold of her little bottom, shifting the cloak so that it hung to Jas’s right side. The knight took one white cheek in each hand, and squeezed them.

“But you knew that your bottom was very special, I wager?”

“Y-yes, my lord. Oh, I…” But Sir Wake had turned her around again, and was putting her cloak to rights.

Hala realized that she had begun to breathe very quickly. Her heart pounded in her chest. At last Sir Wake turned back to her.

Aler said, “Sir Wake of the nineteenth bench, I introduce to you Hala. She is the girl who caused such alarm this morning, but she is now safely girded, as you will see for yourself.” Hala froze, unable to remember what you did when you met someone in a castle, although her mind told her that whatever it was, Jas had just done it perfectly a few moments before. At home, you just bobbed a little if it were someone important—if it wasn’t, you just said “Pleased.”

But Sir Wake looked into her eyes as if she had forgotten to do something essential.

“Your hand, girl,” Aler said. Then she said to Sir Wake, “You can tell she is from Thornwall, Sir Wake. Country manners, you know.”

Hala felt herself blushing to the roots of her hair, as she at last extended her hand for Sir Wake to take in his. When she felt the pressure of his fingers upon hers, the blush only seemed to grow hotter.

“Has a man ever taken your hand before, Hala?” Sir Wake asked softly. He was smiling. the knight had smiled at her.

“N-no, my lord,” Hala whispered, somehow remembering now that she had to do her curtsy, and almost falling over when she realized how different it felt to move her legs that way with a castle-belt encasing her bottom and cunny.

She gave a little gasp at the naughty feeling, and Sir Wake seemed to know exactly what had caused her to make the little sound, though his response to it took Hala utterly by surprise. He reached forward upon the instant and quickly unbuttoned her cloak, while Hala panted in alarm at the feeling of his hands’ nearness to her body’s naughty parts, worried that she must be punished for the fire that blazed up in her.