Trained by the Trillionaire by Emily Tilton 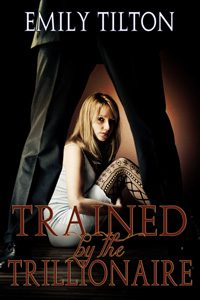 When nineteen-year-old Cynthia Hall falls asleep in the middle of an act of self-pleasure, she is shocked to be awoken by a stern, handsome man standing over her bed, scolding her for her wanton behavior. Within moments, Cynthia has been stripped bare, intimately inspected, and soundly spanked. After her punishment, she is taught how to properly show her submission to a dominant man and then taken to the Institute to be trained for her new life as a concubine.

Upon reaching the Institute, the beautiful, feisty hipster quickly discovers that no part of her virgin body will be off-limits to the powerful trillionaire who now owns her, and she is left blushing crimson as her most shameful, deeply-hidden desires are exposed and exploited.

The Institute’s plans for Cynthia include more than merely selling her for a profit, however, and once she reaches the estate of her new master, she will serve as a source of information for an even more secretive organization. But will her role as an unwitting spy put her life in danger?

Publisher’s Note: Trained by the Trillionaire is a stand-alone novel which shares the same near-future setting as Bound and Initiated and the books of The Institute Series. It includes spankings and sexual scenes. If such material offends you, please don’t buy this book.

Even when he showed Cynthia, in a little suitcase that she would apparently carry with her to her owner’s house, the lacy white lingerie she would wear when the time came for her defloration, she didn’t rebel. It made her feel very fluttery, and rather warm, because she had never had lacy lingerie before, but though Master Greg became very explicit about how her owner would make her keep her panties on while he fucked her pussy from behind, pulling the narrow strip of fabric to the side, his bloodstained cock surging in and out of her and perhaps staining the pristine lace forever, Cynthia only bit her lip and whispered, “Yes, Master,” when he said, “Do you understand, honey? Are you ready for fucking, a nineteen-year-old like you?”

“Get back in the exam chair, Cynthia, please,” Master Greg said in a matter-of-fact voice. “I’m going to plug your anus now.”

As she watched, he opened another part of the suitcase and took a black thing from it.

Addie had told her about these, as she proclaimed her refusal to comply with her boyfriend’s request that she wear one. Cynthia realized suddenly that she must have repressed this memory—and she knew why, because her face glowed like the sun as it came back to her.

Cynthia had looked down at her latte, face burning then as it burned at the sight of the tulip-shaped thing Master Greg meant to insert in her tiniest orifice.

Girls who lived in Williamsburg in their own lofts didn’t do that kind of thing. Cynthia took a step back, her hands moving behind her unconsciously to cover herself, protect the little flower between her bottom-cheeks.

Master Greg held the thing out, in his palm. His eyes had narrowed slightly: she could tell that he had anticipated that this might be the flashpoint—the moment Cynthia would need… breaking. She thought of the cane, but the picture and the aural memory of that terrible sound didn’t have the same effect, now, because girls like Cynthia just didn’t do that. Even Addie had said so.

As if he had read her mind, Master Greg said in a soft but terribly menacing voice, “Hipster girls don’t get their bottoms trained, do they, honey? Or at least you definitely don’t think they do, do you?”

Master Greg shook his head almost sadly. “No, Cynthia. He can’t. Your anus belongs to him, and he’s going to fuck it whenever he wants. I need to start getting you ready, so that he has the ride in there that he’s paid for, and so that you don’t get hurt when he starts using you there daily.”