Don't Miss
Home / Blog / Trained for Their Use by Ivy Barrett

Trained for Their Use by Ivy Barrett 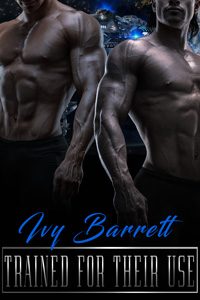 On Earth, Amanda Powell is as good as dead. With her father in way too deep with a ruthless cartel, it is only a matter of time until his enemies come after her. If she wants to stay alive, she has only one choice. She must get off the planet by any means necessary, no matter the price.

In desperation, she offers herself to a pair of Ventori mercenaries in return for safe passage on their ship.  For two years, she will be the property of these stern, handsome aliens, and during that time they will have the right to do with her as they please. They will take her hard and often, in the most shameful of ways, and any protest will earn her a painful, humiliating spanking.

But as they set about training Amanda for their use, the two battle-hardened warriors find that their beautiful human slave appeals to them in a way they did not expect, and some deep, primal part of them demands that they claim her as their mate. When the intensity of their need for her grows beyond their control, will Amanda’s presence prove catastrophic for everyone involved?

Publisher’s Note: Trained for Their Use is a stand-alone novel which is the first book in the Ventori Masters series. It includes spankings and sexual scenes. If such material offends you, please don’t buy this book.

“I decide what’s fair. You are no longer in control.”

He moved so fast all she could do was gasp. Suddenly, he was sitting in the armchair and she was facedown over his lap, her arms neatly trapped between his strong thighs.

His open hand landed across her upturned bottom with resounding force. Shock kept her first reaction to a startled yelp, but the second spank dragged an enraged cry from deep inside her. It hurt. This wasn’t a game. He was actually hurting her. Never in all her twenty-four years had anyone laid a punishing hand on her.

“Stop it!” she screamed, desperate to escape the stinging spanks. “What the fuck is wrong with you! I’m a full-grown woman, not a child.” She twisted and thrashed, bucking and kicking, but he hardly seemed to notice. The twisted fucker was seriously strong.

He spanked her again and again, hard, skillful swats that sent heat and pain radiating up her spine and down her legs. Spanking was supposed to be fun, a titillating game used to spice up a boring sex life. Tears flowed from her eyes and fear overwhelmed her anger. What if he didn’t stop spanking? She was utterly at his mercy. No one would interfere. He commanded this ship, and no one on Earth could rescue her even if they knew she was in danger. Her silent tears turned into shuddering sobs as the reality of her situation crashed down upon her.

She’d fled Earth because her life was in danger. She’d honestly believed that two years of sexual servitude was an acceptable price to pay if she regained control of her life once the ordeal was over. Anger shattered her other emotions. As usual, she’d jumped from the frying pan into the fire. She wasn’t safe here. She was in more danger than she’d been in on Earth. These aliens could do anything they wanted and there was nothing she could do to stop them.

He paused and rested his hand on one burning cheek. The heat sank deeper, triggering an unwanted ache between her thighs. What was wrong with her? Nothing about this was arousing.

“Why am I punishing you?”

“Because you’re a sadist pig.” She regretted the words as soon as they left her mouth. “Wait! I didn’t—”

The next spank was even harder and landed on the back of her thigh.

She screamed and renewed her struggles, trying desperately to free her arm enough to elbow him in the balls. His legs were solid muscle, easily immobilizing her. Emotions churned, threatening to abolish what little remained of her composure. It was too much. It was all too damn much. She sobbed, feeling helpless and abandoned.

After four hard swats he stopped again. “Why are you being spanked?”

“I was disrespectful and argumentative.” Each word tasted bitter, so she whispered under her breath, “After you intentionally provoked me.”

He firmly held her down with one hand as the other pushed between her thighs. She tensed, expecting to be finger-fucked with punishing force. Her inner muscles fluttered and her clit tingled. Despite her humiliation—or perhaps because of it—she was seriously turned on.

Instead of forcing his fingers into her pussy, he collected her wetness and moved it up to her other opening. Her eyes rounded and dread paralyzed her struggles.

“Discipline can take many forms.” He drilled into her tight rear opening without further explanation. His finger was wet, so it didn’t really hurt. But she felt invaded, shamed and embarrassed as never before. Her cheeks pulsed with heat and discomfort, and his finger felt enormous in her ass. Then he pulled his hand back, slowly sliding the offending finger nearly out. He bent closer to her ear and whispered, “Ass play can be incredibly pleasurable, or it can be more humiliating than you can imagine.” He thrust in fast and hard, forcing her to take his entire finger. It took no imagination at all to picture how mortifying it would feel to be punished by his cock ramming into her ass.

2017-11-18
Chris
Previous: His to Corrupt by Ava Sinclair
Next: The Virgin’s Dilemma by Rosy Maylor