Training His Mate by Samantha Madisen 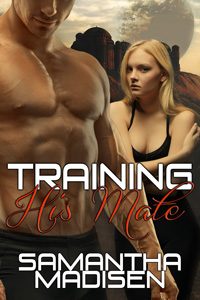 Twenty-year-old Astrid Elcroix has no interest in being taken as a mate by one of the aliens who recently invaded Earth, and she does her best to avoid that fate, but the huge, handsome trainer Darghon tracks her down. Her efforts to resist merely earn her a painful, humiliating strapping on her bare bottom, and soon enough she is on her way to his world to begin her training.

Upon her arrival, Astrid is stripped bare, shamefully displayed, and intimately examined. Her continued defiance is rewarded with ever more humiliating punishments, but despite her blushing cheeks and burning backside she cannot deny her body’s response to Darghon’s stern dominance, and before long she is yearning for him to claim her hard and thoroughly.

Though he has trained many women as mates for his people, Astrid is the first to capture Darghon’s heart. When he takes her in his arms and teaches her to surrender her body to his masterful touch, he begins to wonder if he’ll ever be able to let her go. Will Darghon be forced to give Astrid up to be sold to another man, or can he find a way to keep her as his own?

Publisher’s Note: Training His Mate includes spankings and sexual scenes. If such material offends you, please don’t buy this book.

A wave of cold, sheer humiliation rolled over her as she grabbed the bottom of her sweater and pulled it over her head. In all directions, the mirror reflected her naked body, and she knew that someone was watching her as well. Maybe twenty, maybe more people watching her as she crawled awkwardly onto the table.

She sat down on the table with her legs folded underneath her, and her arms crossed over her chest. She tried to make herself as small as possible, though she knew this would not last long.

The voice boomed, “On your hands and knees, please.”

Astrid gulped and hesitated, but then decided that she could bear no more than her two punishments that she already had coming. Her bottom was still stinging from her last two smacks.

She leaned forward and got on top of her hands and knees, looking down at the table.

At first she thought she was starting to faint, because the material of the table seemed to turn to liquid where she was staring at it, and then she jumped back onto her heels as the plastic-like material morphed into a shape that jutted upward and toward her face. She yelped.

“Place your chin on the chin rest,” the voice droned. “Return to your position or you will receive punishment.”

The white ‘material’ had morphed into a chin rest; she could see that now.

She gave a few shakes of her head, fearing the strange technology she had only heard rumors of but never seen in real life. She reached out and touched the chin rest. It felt like cold plastic.

She gingerly got onto her hands and knees and lowered her chin to the device.

She gasped when, all at once, she felt not only the chin rest but the table itself, near her ankles and her wrists as well, moving. The sensation was bizarre, almost like something metal moving beneath what now felt like human skin. The material slid quickly up and over her neck, immobilizing her head and then tilting it slightly up, and it also wrapped around her wrists and her ankles. She felt her ankles being pulled apart, her wrists moving closer together, and her lower body moving down with the chin rest.

In the end, she was immobilized with her face turned up toward the mirrors, her chest slightly down, her feet wide apart, and… Oh, God.

She closed her eyes, trying to block out the image, splashed all over the mirrors, of her ass, spread open and splayed for all the observers behind the mirrors to see. Completely naked, turned up in a position of humiliating submission.

2017-05-22
Chris
Previous: Claimed by the Omega by Kallista Dane
Next: Her Alien Doctors by Sara Fields