Training His Pet by Measha Stone 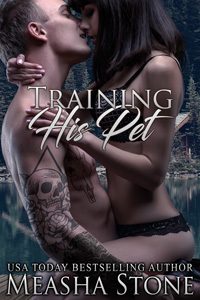 Erika Devore is known for getting the stories nobody else can, but when she ends up on the wrong side of a mob boss she suddenly finds herself in the custody of a former soldier turned security contractor who has made it his business to keep her safe whether she likes it or not.

Though Dax gives Erika no choice in the matter, her body’s response to his bold dominance is undeniable, and soon she is kneeling naked at his feet, blushing as she is fitted with a tail for the first time, and screaming in helpless pleasure as she is brought to one desperately intense climax after another. But when it is safe for her to return home, will that bring an end to her training?

Publisher’s Note: Training His Pet is a stand-alone novel which is the sixth entry in the Owned and Protected series. It includes spankings, sexual scenes, intense and humiliating punishments, and strong D/s and pet play themes. If such material offends you, please don’t buy this book.

He pulled his cock almost all the way out, leaving just the head inside. “What is going to happen here, do you think, pet? Do you think I tied you up here so you could take over or did I tie you up because I’m using your hole for my pleasure?”

A wave of humiliation crashed over her. Her hole.

“Answer me, sweet girl.” He was petting her ass again, the gentleness of his touch smoothed out the edges of the words he’d spoken.

“You’re using my hole for your pleasure,” she said, her voice cracking midsentence.

“That’s right, pet.” He plunged forward again, filling her and making her cry out. He fucked her harder, not sparing her a moment. Over and over his cock thrust into her, hard and unyielding. She felt him fill her, leave her, and fill her again.

“How do you ask if you want your pussy played with?” he asked, keeping his thrusts going. How was he not out of breath like she was?

Her mind racked over everything he’d said to her. She dropped her forehead to the mattress. Tears built in her eyes, burning from embarrassment, of lust, of desire to please him and be pleasured by him. Everything swirled in her mind, but she knew what she had to do, what he wanted from her.

While he continued to fuck her, she did her best to wiggle her ass at him.

He stilled, and she did it again. The ropes made it hard to wiggle much, but he had to see what she was attempting.

His hand slid over her hip, beneath her, and sought out her clit. “That’s my sweet girl,” he cooed and his fingers began to rub the peaked bud in circles as he slowly began to fuck her again.

She moved her ass with more force.

“Please!” she finally yelled when he went even more gentle on her.

He laughed but gave her exactly what she wanted.

His fingers never left her clit. Wet from her own juices running over her pussy, he ran them in circles, applying pressure. The man knew exactly where to touch and with how much force. But his cock, his cock thrust harder. His hips hit her ass, pushing against the plug. Sensations came at her from everywhere, her ass, her pussy, her clit, it built and built until she couldn’t see the room straight. Everything up felt down.

“I… oh… Dax…” Was she supposed to ask? She couldn’t remember. Was that a rule? I seemed like it should be. “Please, I have to come. Please… please… please…” she begged, and when he still didn’t say anything she let loose a loud, long mewl.

“Come, sweet girl,” he finally allowed, reaching up her body with his free hand and wrapping her ponytail around his fist. He pulled her back, truly riding her as her body imploded beneath his touch.

Her hair tugged at the scalp, burned and stung, but instead of distracting, it drove her right over the cliff.

She screamed with each new pulse of her orgasm. Her body ripped apart in an intense bursting of pleasure.

2019-07-13
Chris
Previous: The Most Shameful Game by Emily Tilton
Next: An Old-Fashioned Life by Jessica-Rose Heath