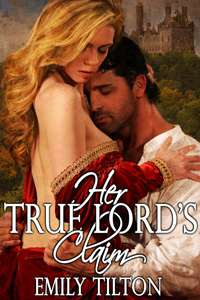 When eighteen-year-old Anne, the Countess of Mercester, hears that she must marry Sir Guy de Freche, she hopes for the best. But when Sir Nele, the handsome knight sent to bring her home to marry Guy, warns Anne that her husband-to-be is a cruel man who will birch her before he takes her in any way he pleases, she tries to escape.

Though, to her great shame, Anne is secretly enthralled with the idea of her husband whipping her, she fears that Guy will ignite her base lusts and she will never be free of them. In her attempt to escape, however, she quickly ends up over Nele’s knee for a long, hard spanking. His punishment leaves Anne quaking with desire, and that night, in spite of his better instincts, Nele gives in to his own lusts and lays claim to her.

As soon as Anne arrives at his estate, Guy marries her and brings her to his bridal chamber. Though she is secretly excited by Guy’s harsh dominance, Anne knows he is an evil man and she promises herself that he will never know the pleasure his punishments bring her. But when Nele returns to rescue Anne, will she yield to her true lord’s claim?

“You will not obey me, then?” he said softly. He placed the very slightest of stresses on the word ‘obey,’ and Anne understood that she had not won the true, complete victory she thought she had. She had exposed a flaw in his perfect authority, but he had too much composure for that little exposure to overwhelm him into the violence Anne had hoped to call from him. She had wanted him to strip her naked, and take her so swiftly that he would not even notice the shameful way she knew her body must respond to his. But though he clearly still did not know her secret, he knew she had by refusing his command gained the upper hand, however slightly, and he took it back, now.

“I… it… I will not obey a command that… that g-goes against my… my honor,” she finally blurted out weakly.

“You have no honor of your own now, my lady,” Guy said evenly. “You are my wife. Surely though you cannot yet bring yourself to obey me in such a new command, you know enough of the married state that when I tell you, as I do now, to turn around and bend over the bed for a birching upon your naked, disobedient rump, you will obey me in that.”

“Oh… merciful… God…” Anne thought of the farmer who had shouted, “God save Lady Anne.” If she screamed loud enough, would he come to her rescue? No, of course he would not. For a man, to birch his wife was a God-given right, just as it had been a God-given right for the sisters to birch Anne and Alianore. Those in power thrashed those under them when they pleased.

Anne whimpered, for the thought about how the powerful thrashed the weak had made the inside of the grotto that lay hidden in her private cleft clench, as if it longed, traitorously, for her new husband’s cock. She thought of Nele teaching her to call that place her ‘cunt,’ and the wickedness of the thought, that her wanton cunt had just clenched at the arrogant declaration that her new husband would now chastise her bare bottom, made it clench again, made her whimper again.

Guy leaned forward once again, and then he took a step, and without any warning at all he had sprung upon her, grasping her shoulders and turning her round. He laid her over the side of the bed as if her struggles against him were not even noticeable, and then he did the dreadful thing: her bridegroom pulled up her gown and her shift, and bared her bottom.

“You are not to tell me, my lady, what I must or must not do.” The voice came from above and behind her, and then his hand came down, hard, in the center of her little bottom.

Anne cried out in shame and pain. It hurt so much more than Nele’s hand had that she could scarcely believe it. Nor did Guy give her an instant to recover, but he kept spanking her, harder and harder, until she was sobbing with the pain, and, thank heaven, the amorous fever had gone.

“Will you undress for your husband, my lady? Will you show your lord what he has purchased, and then give me your maidenhead as a good bride should?”

The fever had gone, but her wicked nature and her shameful craving to submit had not, and his words, combined with the pain of the spanking seemed to go through her like a sword. Surely it was safe to say it, since he would think it was because of the pain?

The spanking stopped. Oh, dear lord, let him just fuck me now, Anne prayed, hardly aware that she had never thought such a wicked thing in her life.

2014-09-28
+admin
Previous: His Naughty Little Mate by Sue Lyndon
Next: The Rancher of Gemini Canyon by Chula Stone