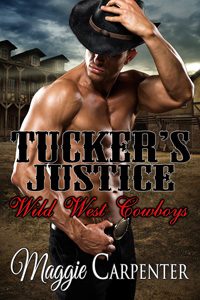 When hardened gunslinger Tucker Prescott is tasked with bringing law and order back to a town overrun by a gang of criminals, he quickly realizes that his biggest challenge won’t be the villainous McGill brothers. The one who will truly put him to the test is Dolly Baker, the beautiful, feisty twenty-two-year-old daughter of the man who hired him.

From the moment she barges into his cabin uninvited, Tucker knows Dolly is going to be trouble, and it isn’t long before she tests his patience one time too many and earns herself a sound spanking. The embarrassing chastisement gets her attention, but it will take quite a bit more than a few smacks on the bottom to teach her obedience, and the more he sees of Dolly, the more Tucker is forced to admit that he would love to be the man to properly tame her.

Tucker didn’t come to Spring Junction to keep a woman in line, however, he came to deal with the McGill brothers and their gang. He has a plan to do just that, but it will depend on his quick wits as much as his quick draw, and despite his best efforts Tucker can’t get Dolly off his mind. Can he bring the outlaws to justice and make her his bride before she drives him to distraction?

“Stop your caterwaulin’,” he barked, encircling her waist with one arm while deftly undoing the buttons at the top of her split skirt. “There’s no excuse that’s gonna get you outta this.”

“You need a proper spankin’, and maybe if I’d given it to you first time, right off,” he declared, yanking her skirt down, “I wouldn’t be dealin’ with you now.”

Dolly was utterly horrified. Her split skirt was suddenly around her knees exposing her thin cotton drawers, and Tucker was dropping onto a fallen tree trunk and pulling her over his lap.

“Sir,” he shouted, landing his hand with a sharp smack. “You’re back to Sir!”

“You go ahead an’ yell, missy, I don’t mind a bit,” he said tersely, landing his hot hand with smack after smack. “Seems to me you’ve been needing a real hard spankin’ for a long time. The other ones didn’t do much good, and I’m gonna make sure this one’s gonna count!”

“It’s about to hurt a whole lot more,” he declared, loosening the string at the waist of her drawers and peeling them back to expose her bottom.

“And I can’t believe you came on down to my cabin after you swore you wouldn’t,” he retorted. “I told you what would happen, and young lady, I keep my promises.”

His hand rose and fell in a flurry of stinging swats, and though she yelped and wriggled she was no match for his strong hold. Even as he raised his leg and placed it over the back of hers, he didn’t miss a beat, and as the minutes ticked by, he increased the force and speed of his flattened spanking palm.

Dolly was beside herself. It was bad enough that he’d lowered her skirt, but to expose her bare bottom was unthinkable. His slaps were landing with speed and carried a mighty sting, and as much as she squirmed her hips to avoid the punishment, it was impossible to evade his scalding hand.

2016-07-17
+admin
Previous: The Alien’s Captive by Ava Sinclair
Next: An Old-Fashioned Homestead by Katie Douglas