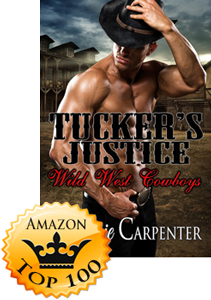 ★★★★★ Nicole H. Vela @ Amazon.com “Gunsmoke meets Walker Texas Ranger!” on July 17, 2016
Tucker Prescott is a no nonsense lawman… order needs to be restored and nothing will get in his way! Not even the willful, impetuous sassy daughter of the man who has brought him to town. But Dolly test him in so many ways. She has ignored his warnings and it’s time to lay the law down on her glorious back side. He has his hands full, he never signed on to disciple her, job one is to deliver the town he is determined to save! As the outlaws keep driving their will on the town’s people he has devised a plan, a preacher, a horse and the right hand of God… they need a prayer! Can Tucker rain hell on earth to men who seem determine to destroy the town of Spring Junction. Can he keep the town he loves safe? Maggie Carpenter, The written in spectacular, the characters are captivating. I laughed and was completely immersed in the book..for me it has an escape quality, I felt I was inside the story. That is a compliment of the writing. Maggie’s books are a readers dream come true. Highly recommending this an all her books. Beyond a five star read!

★★★★★ CF @ Amazon.com “Exciting-Suspensful-More Than Expected” on July 21, 2016
Tucker is some rough and tumble cowboy. Wow. I guess they made them them tougher back in the day. I thoroughly enjoyed the Cowboy’s After Dark series, and assumed this would be similar, but, uh…not exactly. Gunslingers, fights, really nasty outlaws, and Tucker takes them head-on. He’s not just fast with his fists and good with a gun, he’s clever too, but I won’t say more than that. He handles the girl with just as much gusto, and she is one fiery woman. It’s a great read. I can’t wait for the next in the series, and I hope they have as much action as this one.

★★★★★ TiltedHalo54 @ Amazon.com “Awesome story.” on July 21, 2016
I really enjoyed this book. The action was fast paced and I didn’t want to put it down. Tucker was a no nonsense cowboy and Dolly was a headstrong young lady, throw in a town full of thieves and miscreants. Dolly learned the hard way that Tucker did not would not put up with her shenanigans, meanwhile, she fell hard. Read the book to learn the rest of this great story. You won’t be disappointed.

★★★★★ Laurel @ Amazon.com “Suspenseful Action Adventure Romance by Maggie Carpenter” on July 21, 2016
I love Maggie Carpenter books and I’m adding this to my favorites. Tucker is a former gunman who turned around to become a law enforcer. Dolly is a a headstrong stubborn young lady living on a ranch with her father. Tucker has been hired to bring law, order and justice to the town that has been taken over by vicious thugs. Can one man clean up a town filled with bad guys? There’s a hint of paranormal and suspenseful mystery and makes this a face paced action adventure with violence, spanking, witty dialogue, some laugh out loud scenes and more. Great storyline with unexpected twists and turns and I couldn’t put it down until I finished it. I’m looking forward to book 2. I was given this book by Stormy Nights Publications for an honest. The thoughts and opinions are my own.

★★★★★ Amazon Customer @ Amazon.com “Loved it!” on July 23, 2016
I was given a copy of this book for an honest review, and I thoroughly loved reading it! The plot keeps you hooked the whole time with a few twists and turns that I was not expecting! You have the sexy cowboy, and the sassy rancher’s daughter, so what would be a better combo for a Maggie Carpenter book?!

★★★★★ Redrabbitt @ Amazon.com “I AM JUSTICE. I AM DEATH” on July 16, 2016
I enjoyed this western mystery suspense story from the beginning to the end. The story has a great cast of interesting characters, interaction, mystery, suspense, and yes, justice. Duke Baker has been lived in Spring Junction area since it started. Threats to the residents and businesses have become so dangerous; he knows that something has to change, or there will no longer be a town that people will stay in, and even he will need to leave his ranch and home if things do not improve. Dolly Baker has been ordered to stay near the family home by her father, Duke, and she hates not being able to go to town or roam the land freely. Tucker Prescott has been called to the town of Spring Junction by Duke after the town is overrun with lawlessness and now extortion from two Irish brothers and their cohorts.

The plot of this story brings in Tucker Prescott with his plans to rid Spring Junction of the McGill brothers, along with all their henchmen. How he does it is what makes this story so fascinating and entertaining. The interaction between Dolly and Tucker is the beginning of a relationship, even if she is a brat and he takes her in hand, many times. The various characters we meet in the story all add a charming touch. The story is very entertaining, fully of angst, adventures, gunfights, plans gone awry, a little romance, and resolution for the townsfolk. There are several spanking scenes and a mild sex scene. Disclosure: I was provided with an e-copy of this book in exchange for an honest review. All thoughts, opinions, and ratings are my own.

★★★★★ French Cook @ Amazon.com “though there are a lot of fun spankings going on” on July 20, 2016
EXCITING, STEAMY, SENSATIONAL AND TONS OF ACTION

This was quite a departure for this author. I watched the video trailer, and didn’t quite get the skeleton at the end, but now that I’ve read the book, it all makes sense. (Great trailer. Well worth taking the time to watch it). This is more story and action than sex, though there are a lot of fun spankings going on, and the sex, when it was delivered, was steamy as we can expect from this author.

The story is: Tucker Prescott is a gun-for-hire who has arrived in a gold-rush town to bring back law and order. He’s a rolling stone, goes where the trouble is, and hadn’t planned on finding his hands full with a spunky woman while he’s trying to do his job. While it may sound predictable, this book is anything but, and had me laughing and cheering and catching my breath.

This is the first of a series, so I’m hoping the other books that follow will have more of the same. So much fun! If you like creative, fun, slightly grisly violence, spiced up with spanking and heart-felt romance, you’ll love this.