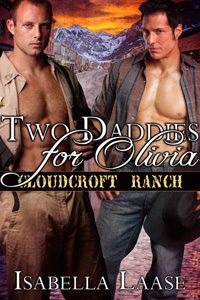 The moment he sets eyes on Olivia Baldwin, small-town doctor Dan Garcia knows what she needs. Though the desperate, hungry girl was just caught in the act of stealing Lincoln Sullivan’s car, Dan convinces his friend not to get the law involved. Instead, he brings Olivia home with him, promising to help her get back on her feet but also warning the beautiful young woman that any further delinquent behavior will earn her a thorough spanking on her bare bottom.

Over the coming weeks, Dan is joined in his efforts to guide and correct Olivia by the town sheriff, ex-Marine Gage Collier. While it makes her blush to be bathed and cared for like a little girl and scolded and spanked when she has been naughty, Olivia delights in their intimate attention, and before long Dan and Gage have taken on the role of her firm but loving daddies.

After a job is found for her at Cloudcroft, a nearby ranch which doubles as a kink-themed resort, Olivia’s eyes are opened to the world of dominance and submission, and she soon discovers just how pleasurable it can be to surrender her body completely to her daddies. But when Dan and Gage learn the truth about Olivia’s past, will it change how they feel about their little girl?

She stared at him, panic rising to close her throat. The lies and deceptions that had served her so well had failed her completely. She should have told him a story. Denied any culpability. Edited a version where she was the savior, and the girls had refused to listen.

But lying to him had never been a welcome part of her past, and she didn’t see it in her future. She’d made a choice that afternoon and took the drug. Willingly, without pressure. Past experiences reminded her that she was lucky a ride home in a police car was the worst thing that had happened.

With as much grace as she could manage, she numbly placed herself over his knee, desperately trying to convince herself that she could do this. With his hand gently rubbing the erogenous zones across her skin-sensitive bottom, she closed her eyes tightly as though darkness would protect her vulnerable backside. The thong cut more deeply along her already wet channel to reveal a new level of embarrassment, but she still felt the loss deeply when he slid it past her butt to rest just below her fleshy target.

The overall effect was simply too much. “Stop… I can’t…”

It was too late. The smack to her bare bottom ignited the exposed flesh from a single, overly sensitive handprint. Before she could store the experience in her memory, four more followed in quick succession, bouncing from right to left like some sort of twisted attempt at fairness. By the fifth, the biting pain was finally registered, and two more were delivered before she recognized that she had been fighting against his control.

“No… No… I can…” she screamed, not caring who might hear her from an open window. Her feet kicked and her body twisted, but she was no match for his strength or his determination.

His chastisement continued to escalate as he layered his message, burning, biting, until the searing sting was all that she could process. She lost track of her past and future problems, and focused on the demands placed upon her present. A half dozen more spanks were delivered without a break, and she hollered, “Ow… I’m sorry… I won’t do it again…”

It wasn’t until she exhausted all possible escape options, however, that she finally succumbed to the inevitable. Her body went limp, and she focused all of her energy on the heat building under his hand. It simply hurt, and she wailed, “Please, I’ll be good.”

He slowed from his peak without quite stopping. Despite the burning on her bottom, her relief was so intense that the tears started in earnest, and she sobbed into his pants leg before he stopped altogether.

She didn’t think she’d survive leaving his side for an arbitrary, cold time-out in the corner. Instead, Dan lifted her to his lap and held her tight. The choking sobs continued as regret for her many past mistakes defeated her other tenuous emotions, but he held her as though his very life depended on her happiness.

Even after their time together, his tender comfort remained alien to a girl who’d lived for so long on the edge of the world. With nothing stopping them, complex emotions, sadness, fear, anger, and guilt all fed her tears, pouring from a place far removed from the discomfort on her bottom. Her vulnerability was so powerful that it almost hurt, but there was something fulfilling about connecting to a part of herself she’d buried for so many years.

Tiny goosebumps prickled her exposed skin until he took the discarded brown quilt and wrapped her inside its warm comfort. Cuddled against his shoulder, she stuck her finger in her mouth and fell against the security of his hardened chest, succumbing slowly to a deep physical and emotional exhaustion, demanding she embrace sleep.

Her last thought before closing her eyes was to gently rub the pressure between her legs that seemed to live with her full-time since coming to Marion, Wyoming.

2018-05-18
Chris
Previous: Her Android Daddy by Rose St. Andrews
Next: His Captive Kitten by Measha Stone