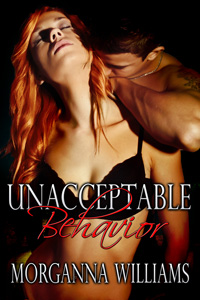 Maxine Reynolds knows it is careless to read naughty stories on her phone will driving, but she is utterly shocked by the consequences when she rear-ends ex-CIA agent Rafe Jennings, the head of security at her place of work. After scolding her for her reckless and unacceptable behavior, he proceeds to give her exactly what she needs—a long, hard, thoroughly embarrassing bare-bottom spanking followed by a belt whipping over the edge of his desk.

After her punishment, Rafe informs Maxine that from now on he’ll be making it his business to keep her in line, and though she protests, she cannot help recognizing that his guidance makes her feel safer and more loved than she’s ever felt before. Still, she can’t let herself believe that he could be genuinely interested in her or that he sees her as more than a girl who needs his help.

Yet once he takes her into his arms and claims her fully, Maxine begins to wonder if maybe he truly does want her as his own. But when Rafe is sent overseas for one last mission, her fears send her into a spiral of self-destruction. Will he return in time to rescue Maxine from herself?

Max gasped when she heard the sound of his belt sliding through pant loops and she spun around to face him, pressing her belabored bottom to the corner as if to protect it.

“No, Rafe! Please… I can’t take anymore,” she wailed passionately.

“You can and will take every bit of what you’ve earned, Maxine. I told you I thought it would be just deserts for you to get exactly what Amanda got in the story and she finished with a taste of the belt,” he said resolutely.

Max felt her face blanch. Amanda had finished with twenty-five licks of Jack’s belt. She knew for sure because she’d read the scene through at least eight times. It was hard to believe that earlier today she’d found it a delicious scene to read, because now Max didn’t think she’d ever read another spanking story as long as she lived. Reality had a lot more bite!

“Bend over the edge of my desk, Maxine,” Rafe said quietly.

She studied his face, looking for any softening of his features. There was none and Max knew she needed to buck up and take whatever punishment he gave her.

Under his stern gaze she marched up to the desk and laid her torso across it, telling herself she was woman enough to take her punishment. A wistful little thought of what it would be like to always answer to Rafe this way made her shiver a little.

“Good girl, I’m proud of you,” he told her after she’d positioned herself.

Max was shocked by the swell of pride that filled her at his words. She watched over her shoulder as Rafe doubled the belt in his hand and placed a hand on the small of her back to hold her in place. “Twenty-five and we’ll be done.”

Max closed her eyes; she’d known it was too much to hope for that he hadn’t actually read the scene. Her eyes flew back open the instant the first line of fire fell across her vulnerable backside.

2015-08-09
+admin
Previous: The Daddy’s Girl Collection by Normandie Alleman
Next: Taming His Mate by Vonna Harper