Under Alien Influence by Emily Tilton 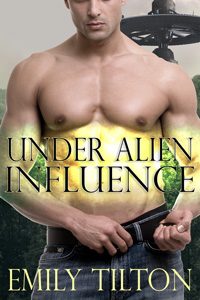 When a pair of invisible, inorganic aliens arrive on Earth, they promptly set about finding ways to entertain themselves. Using their mind control abilities, they awaken the previously dormant dominant instincts within two human males, and before long they are observing with great amusement as two beautiful, naughty young women are thoroughly and shamefully mastered.

Though eighteen-year-old Hailey Miller’s parents asked their neighbor to keep an eye on her while they are out of town, the last thing she expected was for the handsome businessman to catch her in an act of self-pleasure and then take it upon himself to spank her bare bottom soundly. Despite her indignance, the painful, humiliating chastisement leaves Hailey quivering with need, and soon she is writhing in helpless ecstasy as her virgin body is used and enjoyed.

Meanwhile, across town, twenty-three-year-old Janice Strauss is learning the hard way what happens to a young wife when her husband has enough of her sharp tongue. As she kneels at his feet with her bottom still burning to thank him for her well-deserved punishment, Janice knows her marriage has changed forever, and though it makes her blush to admit it, she is glad it has.

Publisher’s Note: Under Alien Influence includes spankings and sexual scenes. If such material offends you, please don’t buy this book.

“Now raise your skirt for me. I’m going to pull down your panties. A wife needs to be spanked on her bare bottom.”

“But…” Janice protested quickly, but then her voice trailed off. Her hands, held folded in front of her in a sort of beseeching way, twitched downward, touched the front of the floral-printed cotton blend of her knee-length dress. “Why?” she whispered, as her fingertips pulled just a little at the fabric, not ready to obey him yet it seemed, but trying to prolong the time before Nick grew strict and did something to enforce her compliance with his shameful instructions.

“Why does a wife get spanked on the bare, do you mean?” Nick asked, raising his eyebrows. He didn’t mind lingering a little at this point: having his arm around Janice’s waist and knowing that he would soon begin to give her what she had earned for her misbehavior, and after would enjoy her just as he pleased with his already very hard cock, made this stage of her training delicious in its own right.

Janice nodded, biting her lip. A deep crease had appeared on her forehead.

“Because a good wife doesn’t get to keep her clothes on when her husband wants them off, Janice. I haven’t enforced my rights the way I know I should have, but that’s going to change.” He watched her lips part, as if to protest, but no sound came out. Something in him that must have lain buried deep until tonight seemed to rise just as his cock had, and instead of keeping it down in his mind, examining it, and putting it away, Nick spoke it out—as he intended to voice all such impulses in the future. “From now on, Janice, you’ll be naked a good deal of the time. When you’re allowed to put on panties, I will choose them, and then you will ask me for permission to take them down when you need to use the bathroom.”

Janice had begun to shake her head, but that only seemed to inspire a greater flow of dominant arousal in Nick.

“Don’t shake your head, sweetheart. We both know you’ve needed this kind of discipline for a long time. Things are going to be very different now, especially in the bedroom.”

She drew back, pulled a little against Nick’s arm, but he had never felt as sure of anything as he did that the time to spank the woman he loved had arrived. He drew her firmly down over his lap, and transferred his grip on her waist quickly to his left arm, so that he could start to raise her dress for her, since she had disobeyed him. Her backside would pay the price for that hesitation, Nick promised himself, and next time Janice would pull up her skirt or pull down her pants when her husband instructed her to prepare for punishment—or for fucking.

“Nick! Please… don’t… I’m not ready…” Her voice had a sort of trance-like quality to it, now, as it rose from where her head hung below his left thigh, since he had upended her completely to make her bottom available for the stern lesson she would get.

He had her skirt up over her waist, to expose her blue-flowered panties. His cock gave a leap at the sight, and the knowledge that he would take them down, now, whether Janice liked it or not. She struggled under his restraining arm, growing more frantic as she seemed to grasp that he truly did mean to punish her as she deserved for her disrespect to her husband.

“You’re ready for discipline when I decide you’re ready, sweetheart. And you’ll prepare yourself for fucking when I want to have sex, too. That’s why a wife gets punished on the bare—so that her husband can have his way just as he likes, afterward.”

He put his fingers inside the waistband of the modest, little-girlish cotton panties, and pulled them down with a forceful yank, to leave them almost at her knees. Janice’s pretty little bottom met his eyes, with a peep of her cunt (why was he thinking of her private parts this way? He had barely even called Janice’s vagina a ‘pussy’ in the privacy of his own thoughts before tonight!) and a few stray blonde hairs showing between her thighs.

Nick couldn’t resist, and he didn’t mean to: he put two fingers there. “You’ll shave this for me tomorrow, Janice, or I’ll spank you again when I get home. I like a bare cunt on a wife. It shows she understands she has no privacy from her husband, inside her panties.”

Janice gave a low moan, and a gasp. “You… you won’t…” she whispered.

But Nick could tell just from the heady scent of her arousal that his wife had gotten very wet at the idea of his new mastery of her body. He raised his right hand and brought it down hard, in the middle of her bottom, spanning both cheeks with a hard smack, the very first spank he had given his wife, but by no means the last.