Under Daddy’s Protection by Serafine Laveaux 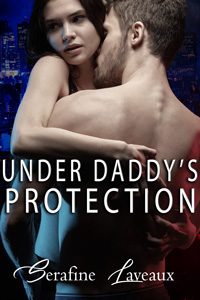 He may be a hardened mercenary, but Gage isn’t the kind of man who would accept a contract to kill a woman just because she overheard something she wasn’t meant to hear, especially when the target is a sweet, innocent girl like Nikki. The moment he discovers there is a price on her life, Gage takes it upon himself to intervene, but he soon realizes that the beautiful, naïve twenty-three-year-old needs more than just a bodyguard. What Nikki really, truly needs is a daddy…

When her boss catches her eavesdropping on a conversation with one of his associates, Nikki wonders if she will be fired, but the reality is much more terrifying. Before she knows it, two assassins have fought to the death in her apartment and the victor has taken her into his custody.

Though her childlike curiosity and boundless energy amuse him as much as they exasperate him, Gage is determined to protect Nikki, even if that means baring her bottom and spanking her until she’s sobbing when she refuses to do as she is told. Soon Nikki is calling Gage daddy as he claims her hard and thoroughly in every way, but can he keep his little girl safe no matter what?

Nikki was only vaguely aware of being carried from the car. The subdued chatter of passersby, the smooth swoosh of the elevator doors, even the click of the door as it closed behind them barely registered. It wasn’t until Gage set her down against the wall and sank to his knees to bury his face between her legs that she jolted back to the present. Strong fingers tugged her panties to one side to allow his hot tongue access to her still throbbing pussy, greedily licking each swollen lip before taking a skillful turn around her clit. He sucked and licked, groaning with need as he devoured her.

Eager to give his skillful tongue better access, she raised one leg to wrap over his shoulder, leaning against the wall for support as he slipped two fingers inside her. When he wrapped his other hand around her butt and slipped a finger between her cheeks to first caress, then gently probe her tight ass, she tried to protest. Nikki’s backdoor had always been off limits but Gage had her too turned on now to put up any real argument. Before she could do more than gasp weakly, he gently slipped one finger into the virgin hole while at the same time plunging his tongue deep into her pussy, electrifying what felt like a million and a half nerve endings simultaneously. In an instant Nikki understood what all the fuss was about, and as she allowed herself to relax onto Gage’s fingers a familiar shudder began to work its way through her body.

“Not yet,” Gage warned, immediately recognizing her telltale reaction. “Wait for me.”

Nikki whimpered in frustration as his fingers slipped from her greedy holes, but when he grasped her around the waist and stood up, raising her with him, she understood. Quickly she wrapped one leg around his waist and lowered the other from his shoulder to join it, then reached down between them to impatiently tug at the button of his trousers. It took only a second to free him, and though she could not see it she felt his cock spring loose and eagerly nose its way between her dripping lips. Gage held her pinned to the wall and slowly lowered her onto it, inch by inch, letting himself into her tight wetness with excruciating slowness. Halfway in he stopped, holding her in place as he watched her expectantly.

“Do you want my cock in you, Kitten?” His voice was husky but teasing.

Nikki nodded frantically. At the moment his cock buried in her pussy was the only thing she wanted.

“I want it in me,” she gasped, struggling to inch her way down on it herself only to have him pull back out slightly.

Say it right? What did that even mean? “I want your cock in me,” she groaned. “Please, Daddy, I want your cock in me.” When he rewarded her with another inch of it she knew she’d gotten it right. The bulge in his pants earlier had warned her of his size but it wasn’t until she found herself sliding down his throbbing shaft like a two-sizes-too-small glove that she understood just how huge he was. Nikki sighed as her inexperienced pussy stretched to accommodate every inch of him, then hitched slightly when she felt his hand return its attention to her ass once more.

This time instead of protesting, she begged. Gage chuckled as he began to slowly thrust himself in and out of her. “Do you want me in both holes?” he whispered against her ear as his finger teased her puckered back hole. When she only nodded he shook his head. “I want you to say it,” he demanded as he kissed her neck. “Say, I want you in both holes, Gage.”

Her face became as hot as the rest of her body and Nikki let out an embarrassed giggle. She’d never been the sort to talk dirty during sex much less say what she wanted, but she wanted what he was offering too much to be shy now. “I want you in both holes, Daddy,” she repeated, and was immediately rewarded by not one but two fingers invading her no man’s land. “Oh, my god,” she exhaled as he began to rhythmically fuck her two holes. Another shudder racked through her and this time he didn’t order her to wait.

“Come for me, Kitten,” he ordered.